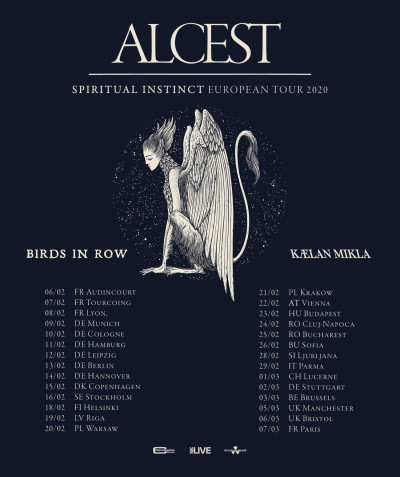 The opening band for the evening was Icelandic trio Kælan Mikla; they describe themselves as synth-punk, and it was not abundantly clear how they would fit into the nights line-up, not knowing them but being very familiar with the other two acts. It was a pretty mixed crowd: a few battle-jacket-wearing old-school metal heads, a mish-mash of usual Mancunian gig-goers, and even a few full-on goths. The mood in Gorilla was relaxed and chilled; It’s a shame that more bands don’t play the venue because it is great – small enough to still be intimate, a great PA and a really central location; judging by the venue posters, club nights must bring in more money.

Kælan Mikla took to the stage bathed in purple; the band all dressed in black, artfully draped in chains. The music is very dark and Gothic with a bit of an 80’s vibe happening. Vocalist Laufey Soffía has an interesting style and ranges from breathy and soft to a piercing almost scream. It’s backed by Margrét Rósa Dóru-Harrýsdóttir on bass and Sólveig Matthildur Kristjánsdóttir on synth,  All three look comfortable and relaxed on stage and seem to be enjoying themselves, and a few in the crowd did too. Probably not for everyone, but fans of dark, pulsating music with a touch of Icelandic weirdness will probably love it.

Second up is French DIY punk outfit, Birds in Row. Such is the glamour of gigs like this the band set themselves up – drummer T in the middle of the stage with bass and guitar on either side; they also draped a string of bulbs around the stage as a sort of lo-fi lighting rig. All pretty low key and fitting with the DIY ethos of the band. They opened with ‘We Count So We Don’t Have To Listen’ from their 2018 album We Already Lost the World, straight into things at their intense, sinewy, visceral best. Such was the fervour of B’s guitar playing that he broke a string. No guitar techs and racks of instruments here, so the rest of the band filled in as he quickly changed it, and without much fuss they charged straight into ‘I Don’t Dance’ and ‘Love is Political’. B doesn’t say too much, but introduces a few songs and encourages the crowd to talk to them afterwards and seems a really nice guy. The band’s music is raw, visceral and energetic, and they evidently love their craft.

During the set they played most of their most recent album with some older tracks (after a little bit of research they were ‘Can’t Leave’, ‘Can’t Lie’ and ‘Can’t Love’ from their 2015 split EP). To finish the set they played the stunning ‘You, Me and the Violence’  and finally ‘O’Dear’. It was evident that not everyone knew Birds in Row before they played but they no doubt gained a few new fans after they finished. They are a great live band to watch, they give it their al,l and despite some technical difficulties took it all in their stride. The only thing I would like is for them to add ‘Pilori’ to their set, but we can’t have it all.

Headlining the show were fellow Frenchmen Alcest playing as a four-piece in the live format. A slightly more elaborate stage set-up and by this point the venue was full. As they readied themselves Allegri’s ‘Miserere’ played, which must be the first time I have heard choral music before a metal gig; it worked perfectly, however. as a prelude to ‘Les Jardins de Minuit’ from their 2019 album Spiritual Instinct. During the pause in the intro the room was almost silent, but the feeling of anticipation from those who knew what was coming next was palpable – they went straight into ‘Protection’ from the same album. Although not as energetic as some  other bands they are a master of their craft and create a wonderful, immersive experience. Looking around the room you could see a few arms aloft, and a few just completely lost in the music with closed eyes. Next they went back to their 2016 album, Kodama for the more energetic ‘Oiseaux de Proie’. Drummer Winterhalter manages the complex drums with ease, pierces the swathes of guitar, and carries the track to a stunning crescendo.

They played a couple of older tracks, ‘Autre Temps’ and ‘Ecailles de lune’; both tracks are quite different from their more recent work and go some way to telling the story of the band’s history and make me want to explore their back-catalogue more thoroughly. They played a couple more tracks from Spiritual Instinct before finishing the main set with the simply wonderful ‘Kodama’. For those like me who were introduced to the band with this album, it was a high-point in the set. For the encore it was back to older material with ‘Là Où Naissent les Couleurs Nouvelles’ and ending with ten minute epic, ‘Déliverance’.

Despite singing in a foreign language (at least for us non-Francophones) Alcest have a way of touching people; it is genuinely beautiful and when hearing it live it becomes an immersive experience. A friend of mine later told me that she actually cried at one point, which I totally understand because it is, for reasons I’m not really sure of, a very emotive experience.

Overall, what might seem a strange mix of bands from a genre (and language) point of view blended well, and it all seemed like it was meant to be. I can’t imagine many bands would like to follow Birds in Row but Alcest managed it with ease; they played a varied set with a good balance of old and new, showed some versatility and somehow, after all I have said, remained slightly understated. Highly recommended.