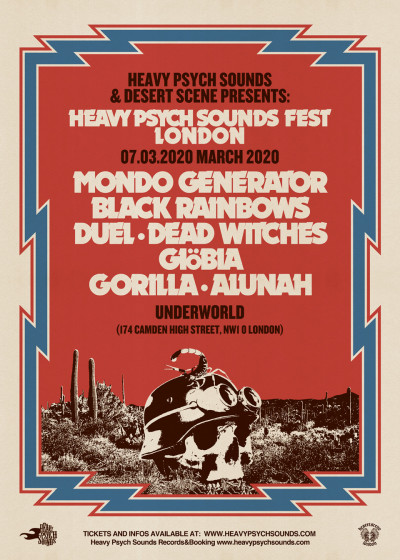 It’s a  splendid idea for a label with an extensive roster of bands to showcase their signings for an all-day event. That’s what the Heavy Psych Sounds label have done at the Underworld venue in North London. And as you walk into the venue you are met with a long merchandise stall lovingly filled with sections of each of the bands playing on the bill, and a comprehensive vinyl and CD section of what represents the label’s catalogue, as well as a well-stocked range of t-shirts of the label itself. And, not forgetting a free CD compilation to put the cherries on the cake.

There has been a slight amendment to the originally advertised line-up as both Gorilla and Gioba have pulled out. As-a consequence, the kick-off is an hour later but Birmingham’s Alunah are still the festival’s openers. Emerging on stage to an initially empty hall, this quickly fills up as those in the bar and merchandise area make their way round for the band to have an audience to play to.

It is the first time I’ve seen the current incarnation of the band with the soaring vocals of Sian Greenaway leading from the front. Many of the songs are plucked from their latest album Violet Hour, and there is a noticeable change of direction as mid-tempo melodic hard rock slightly takes over the band’s earlier heavy mid-paced Doom. It is good to hear Sian’s strong vocals given space in the mix to be loud and clear, but they are at their best when they still tip their hats off to the doomy side of Black Sabbath as on the set standout, ‘Hunt.’

Line-up changes and replacements become a clear and obvious theme of the day as Dead Witches enter stage. Guitarist Olliver Irongiant and vocalist Soozi Chameleone have been replaced by Rab Mcilrath and Spring Thompson respectively, and we are informed they have been together for only three weeks. The significant difference is even though they play many from the fine The Final Exorcism album, there is a reduction of the full “Ollie effect” of incredibly all-consuming, inescapable fuzzy loudness which saw their Desertfest performance at the same venue nearly fell the Underworld’s long-standing pillars, such was the volume’s ferocity.

What we do see is a growing confidence across the set by the band as new vocalist Spring honestly says she ”feels naked” without a bass strapped around her shoulder. She puts in a commendable performance as she bounces around the stage delivering gritty vocals. They do still maintain the band’s low-end sludgy heaviness, especially evident on the closing ferociously raging beast of ‘Fear the Priest.’

Next up, the Austin-Texas Duel blast out of the blocks in a fiery riffy fury, like wound up toys eventually being let loose, and attack it like they have both a point to prove and are indeed the headliners. They are tight, and inject an enthusiasm and explosive energy which fares better live at high volume compared to their decent-enough records. As the name suggests, there are some duel guitar interplays, but not as much as I was expecting and hoping. All bands so far have been met with appreciative applause, but Duel had the first of today’s big support.

Italy’s Black Rainbows do make a mighty slab of heavy-psych vibes for a trio. It is an absorbing blend of Nebula, Monster Magnet and Hawkwind, and they hit the spot for some heavy-duty head-long adventure around the universe. New track ‘Isolation’ is a fine taster to whet the appetite for the forthcoming Cosmic Ritual Supertrip album due out in May. As much as I enjoy BR’s heavy grooving blast into space, I always do wonder how much of a big leap they would make if they had a Dave Wyndorf-style charismatic vocalist at the helm.

An enjoyable day then, Black Rainbows sent me merrily away dreaming I am in a rocket to the stars instead of enduring the significantly slower bus-replacement service journey home. Yes, it did mean missing Mondo Generator, but I look forward to more Heavy Psych Sounds Records events in the not-too-distant future.