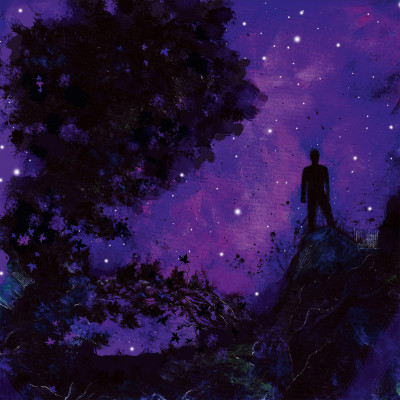 Canada’s Unreqvited have garnered an overwhelming amount of praise over the past few years, and rightfully so. Sole member 鬼 has poured his heart and soul into this project, purging away sorrow through expressive beauty and anguished cries. His catharsis of sufferance has become a soothing remedy for many people, myself included.

鬼 deviated recently into a more raw and straight-forward expression with his DSBM themed Consciousness Torn From The Void under the moniker of The Ember, The Ash. Coming off the back of this success with yet another outstanding release again shows that 鬼 is a man who works tirelessly to put everything into his work.

Unreqvited’s new album Mosaic II: la déteste et la détresse follows 2018’s beautiful part I: l’amour et l’ardeur, whose warmth still permeates my memory. If part I was Mosaic‘s comfort then part II is the chill that follows. The moody picking of strings introduces opening track ‘Nightfall’, which then trickles into a thoughtful and smoky ambience that’s very White Ward-esque. The tone shifts and spirals into a cacophony of harsh, melancholic textures and deathly bellows. There is a hint of iciness to the marching beat of the mid-section that never veers too far into the black, but still gives this piece a grim edge, transforming from sombreness into something more upbeat before falling back into the night. Already the contrast to part 1 is clear with part 2 having thrown in a few darker tiles to Mosaic’s palette.

‘Wasteland’ kicks up a storm with a generous helping of blast beats introduced early on, something 鬼 hasn’t utilised for a couple of releases. The harshness of the drums paired with gorgeous tremolos make for a marriage made in blackgazing heaven. There’s something twisted, angular, about this particular track… it blisters along in parts then creeps by with a hauntingly sinister pace. It’s the type of track that screams for lyrics to rage along to, one aspect I’d love 鬼 to sprinkle into future releases.

‘Pale’ may be lifeless by name but the track glows as radiant as Unreqvited’s best do. It is gentle yet commanding and utterly ethereal. Emotive, scratchy guitars melt away your troubles whilst making sure you stay reflective, making this the albums true highlight. Finally, though out of place to my ears and better suited on another release the closing trilogy of ambience called ‘Transience’ may still be quite personal to 鬼, therefore integral to his musical vision. Nonetheless the album is complete and its impact will be met with reverence.

The seemingly boundless palette of ‘black metal’ has once again proven that its colours run vibrant and exquisite for such a typically grey genre. 鬼 continues to haunt the scene with a rainbow-dipped brush stained with hues of despair, painting a smile onto faces that can truly make you grin ear to ear as darker colours drip away, fading and forgotten. Even in the darkest notes of cathartic reflection there is Unreqvited’s hopeful beauty to bring peace to your soul.