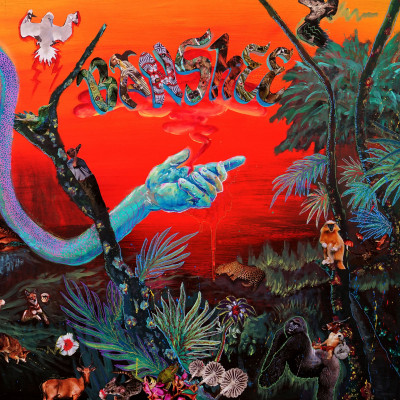 Livin’ In The Jungle by Banshee

Freaks of the world unite and play homage to the new bad-ass rockers in town. The swirling cavorting and rank smell of rock and fucking roll is driving a hot strip up your puny backside as Boston’s Banshee unfurl their brand new album Livin’ In The Jungle. But is it any good we may ask? Does it have that little something that trips our minds into a little light fantastic then leaves us reeling around in a haze of dope, booze, and whatever else may stir your pleasures?

Well, yes..in a way it does, and as the rolling riffs of the title track evolve (or is that devolve) into the prehistoric ‘Savage Man’, you get a sense of just what this band are aiming for. There’s some abandonment in play here that hasn’t been heard since the wacked out days of Alice Cooper (and yes, the press release does play on the Cooperisms, but hey..go listen to Killer..it’s all there) but there is also the balls out attitude that somehow got lost on the likes of Uncle Acid and co who took a turn for the serious and forgot that rock and roll is supposed to be FUN. Yes, you got it…FUN with a capital F.U.N.

These rank Bostonites like to play around with some tribalism too, and invite you into an occult world of fucked up garage rock. It almost borders on pastiche at times, but the sheer bravado pulls it through to the other side and when the slow burn of ‘Credo‘ sinks in to the rabid drawl of ‘Snake Charmer‘, then you just have to tip your hat to them. Here’s a band living right in that fucking moment that burns a hole right through your eyes. No looking back, fuck forward, live your life right now.

It’s “banshee” like noise may start to sound like a wail of noise after a while, but it’s never any less invigorating and ‘The Atomic Flu’ certainly sounds like the end of the world B-movie disaster its trying to emulate, replete with a fist pumping chorus which you will find has simply been a missing part of your life for this long. Topping this is ‘Caged Birds’ which is both ridiculous and sublime in equal measures. Kind of like an all action advert for the band themselves, it’s the kind of earworm song which sticks with you and lifts you up when you need some freaked out joy. That’s Banshee in a nutshell for you. Hardly a band to change the world, or your life, but they will give you a fucking good time. Buy this album and live in their world for just a little while. You’ll feel better when you leave, if a little freaked out.