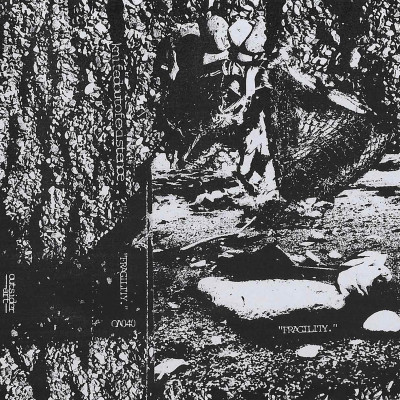 The album begins with a soothing, ambient work entitled ‘Work in Progress’. It’s largely Foley recordings of birds and water and what sounds like various home appliances recorded in a welcoming fashion. Sounds nice right? However, it’s more aptly described as a well-executed bait to guide the listener into a false sense of security. The second track ‘Better To Be Broken Than To Be Hardened’ bounds into the album with an unsettlingly oozing keyboard part with equally disturbing samples of the shuffling unknown; it feels like falling into a wasp’s nest. The different components zooming around ominously, against zoned-out high pitch squeals. It’s the perennial hymn of the disassociated.

Perhaps, the greatest downside of this kind of music is that you can’t just skip through it, to see if you “like it”, if you don’t experience, the fluid, well-orchestrated movements of the sound work, then you won’t actually understand what makes it so engrossing and so interesting in the first place. It’s not like a more conventional song where you can kind of see if you like the various components; there is too much going on here and deliberately decisions being made to intentional make certain sounds warm and others repulsive.

Take track three ‘Water Drains Between Stones’ for example, there’s a warm synth bedrock, somewhat reminiscent of The Shining’s main theme, that cradles the listener whilst showers of noise piss down abrasively over head. To not have that ease in and ease out adjustment period, you may miss the desired sensation. It’s like Jenga, if you only see the mess on the floor, you miss the tower being built and the pleasure of that tower splintering before your eyes. The lo-fi production here is done really carefully and in really satisfyingly way. I hope that the artist himself is the sound recordist for the samples, ‘cause there’s a cinematic clarity and warmth to them all.

‘Joy Rendered Bittersweet’ is a classic harsh noise track with a little bit of added melody, but it almost feels thrown in for the sake of waving to some fans of previous, more abrasive releases. Or perhaps it’s an aperitif to get us ready for the equally sedately and anxiety inducing mind-bender that is ‘Roots Torn and Exposed’. The final track is a homage to the void. It feels like self-medicating suicidal depression with vast quantities of cannabis and benzodiazepines on a daily basis; my former home, deep in the void.

It’s bizarre how much it connects with me, whilst barely being anything. Kind of sad to think a lot of musicians band together and rehearse and write and record for ages and do a whole press cycle and it doesn’t make me feel anything at all, not a drop of catharsis. Knifedoutofexistence churns out albums of noise like hot dinners and still manages to cut to my core as though it was second nature. I guess we’re just cut from the same cloth. At the end of the day, music is just the sound of self-expression and the only value it has comes from our ability to empathise with it. Me telling you that I like an album doesn’t make it good or bad, it just means, it connected with the way I feel.