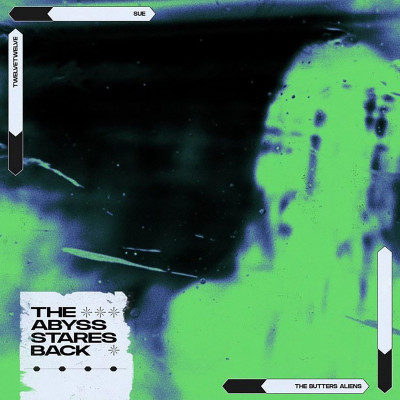 Hey, do you like fast, cheap, slightly wonky, punk rock? Here’s an old school split EP featuring three young teams of unsigned Birmingham punks, SUE, Twelve Twelve and The Butters Aliens. I know next to nothing about any of them but they bring you three complementary twists on the basics here. The Abyss Stares Back‘s title nods to an apparent cosmic horror theme. Truth be told, that’s barely discernible but I think it’s beside the point. This zips by in under ten minutes of clattering drums, buzzing guitars and wild untutored vocals. Check it out.

First up The Butter Aliens, ‘Rat Trap’ is on the skate punk end of things. They remind me just a little bit of The Stupids. There’s a lyrical nod to Lightning McQueen that makes me smile and some fun screaming behind the guitar solo too. It’s charmingly lo-fi in an old skool style you probably thought nobody did anymore. I mean, you can record a band on a smartphone and get cleaner sound than this these days can’t you? Woolly, buzzing guitar echoes down the hall under too loud vocals. Here ‘cosmic horror’ comes in the entirely justifiable teenage fear of working life.

Twelve Twelve play a slightly tougher, tenser, hardcore. ‘Pills’ is all moody verses and surging choruses. It appears to concern paranoid visions brought about by the titular pills. Almost four minutes long is a bit excessive for this sort of thing but we’ll let it ride as the lyrics work in the ultimate hardcore/teen chant “the universe is set against me!”

Last but not least SUE may be the most interesting of the three. ‘The Beast’ races by frantically but seems to have a dash more roll in its rock than the others. Eyeball to eyeball with a cackling personal demon you can easily picture front man Elliot as a shaking, sweating, mess of adrenaline and terror.

The purpose of these kinds of things is to make an introduction I suppose, a short, sharp hello. Take you ten minutes to give this a listen if you think it might be your kind of thing. The bands have enough but not too much in common, they’d definitely make a good live triple bill. If I were still a young and reckless kid I’d be all over this. Now, it slightly makes my bones ache just to think of it. Still, even bands as young as these lot are given to nostalgia these days, remember when we used to go to punk gigs and get covered in beer and sweat and bruises? Remember when the abyss staring back at you was a joke? It all seems so long ago.