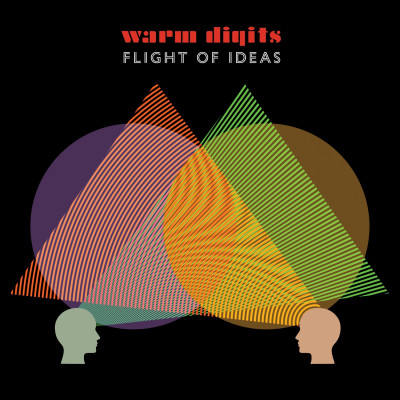 Flight of Ideas by Warm Digits

I know it’s late. It’s not as late as my review for their last album though. It’s hard to write about music right now. Hard to keep an appropriate two metres distance from the elephant in the room. Everything is virus. The present moment casts a sickly light over it all. You want to face the music and just be lost in it but it’s not so easy. The whole world is sharing old favourites and new streams on social media to block it out. Warm Digits have always done a fine line in busy and transportive head rush tunes, Flight of Ideas should be just the thing.

Charging out the gate ‘Frames and Cages’ is a typically powerhouse instrumental. The slightly eastern edge to the guitar recalls the Chemical Brothers’ ‘Private Psychedelic Reel’, if it were hyper caffeinated and late for tomorrow. A condensed epic, at just past the two minute mark the taut bustle gives way to a widescreen synth vista and floats up on an illusory calm. Even then there’s a background clank that sounds like a kid banging a milk bottle with a spoon. The second tune is called ‘Feel The Panic’ and plunges us face first into the cold water sink of the here and now. Obviously done and dusted before all this began it nonetheless feels like a crystal pop moment that matches the times. And damn if it isn’t a flat out banger into the bargain. The first of the album’s collaborations it features The Lovely Eggs, Holly’s glorious shop girl voice a perfect fit to its over saturated electro-pop. It’s a strong contender for album high point.

After three quite distinct records Flight of Ideas sees Warm Digits rework and build on its predecessor Wireless World in a way that both works and makes complete sense but somehow still leaves me a little uneasy. I think it’s all the guest vocalists, this time making up half the record. It’s not that any of them are disastrous derails but they combine to give the record multiple personalities pulling in different directions. It’s like a loud and chaotic train station. It’s not good for my anxiety. Worse than that it leaves the Warm Digits’ own musical voice slightly diminished on their instrumental tracks. Rather than taking the chance to shine, free of showboating singers, they feel hemmed in. Hectic and curtailed. All those musical ideas are still packed in there though, I long for them to stretch out over a few more minutes and give them the space they deserve.

I wasn’t initially keen on the first track to be shared from the album, the Emma Pollock number ‘The View From Nowhere’. Perhaps this is at the root of my qualms. It’s a slow burn charmer though, 80’s vibes but a contemporary feel. In a serendipitous moment of brain melt I noted down the band’s name as Warm Disco which nicely captures what’s going on here. ‘Fools Tomorrow’ finds Paul Smith at the mic and shuffles through at least three moods. Starting out as fidgety and combative Depeche Mode electro it swerves into the overloaded rave pop arena before getting all windswept and epic in an uncomfortably Ultravox manner. The tune with The Orielles, ‘Shake The Wheels Off’ is a solid dancefloor filler, machine funk with the cowbell smacking you right in the middle of your forehead. They bring some sweet vocals and a great section where they use them as overlapping textures.

The other candidate for best in show is ‘Everyone Nervous’ which features Rozi Plain on a lovely slice of swooning electro pop worthy of St. Etienne. On their last couple of tunes ‘False Positive’ brings some strong 80’s electro flavours that even call Shannon to mind and a guitar solo worthy of Barney Sumner in the same era. Lastly we come to the futurist car chase of title track on which the duo’s own Steve Jefferis steps up to the mic for a spot of discrete singing. ‘Flight of Ideas’ is a reference to a thought disorder in psychology “a rapid shifting of ideas with only superficial associative connections between them”. In it they saw a metaphor for our current information overload and the associated breakdown of trust. I’m sure they’re also smart enough to see a little of themselves in that. Flight of Ideas is a colourful, hyperkinetic rush of sound and ideas, another heart racing jolt to the synapses.