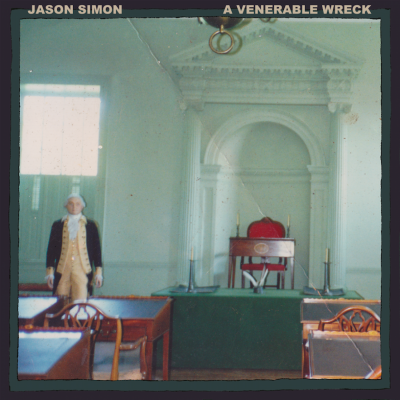 A Venerable Wreck by Jason Simon

Jason Simon is the guitarist/vocalist from DC-based psych rock group Dead Meadow. This is not his first solo trip, but it could be his clearest release. It’s a laid back affair, replete with lazy guitar meanderings and a display of ideas first formed with Dead Meadow and inhabiting a dreamy realm that crosses genres such as Americana and cosmic psych. On A Venerable Wreck, Simon collaborates with Nate Ryan and Jason Anchondo from The Warlocks. His songs were recorded over a number of years and the expansive production gives rise to a mélange of cool arrangements ranging from folk to blues and a straight psych vibe.

‘The Red Dust’ is like a cross between slowhand Eric Clapton and a bouncing T-Rex. The bluesy riffs and slide guitar are highlights in this deceptively upbeat tune. ‘The Same Dream’ employs a lead banjo line and Jason’s vocals remind me of David Lowery from Camper Van Beethoven or Cracker. It’s droning folk with a side of alt-country and it’s darkly gorgeous. One heck of a way to start off an album. ‘See What It Takes’ is a beautiful, sharply drawn example of Americana with steel guitar and organ adding fine, textural elements. ‘Snowflakes are Dancing’ is a slowed down waltz with gentle vocals, while ‘Moments of Peace’ is a much needed balm to the senses in these tough times.

‘Doors Won’t Shut Blues’ once again reminds of Cracker, not only in the musical stylings but also the resemblance to Lowery’s voice. I also dig the cool guitar solos and instrumental layering. ‘Jupiter’ is lovely psych folk, and the trippy guitar lends itself perfectly to this tune. The album’s title track is a strange beast indeed, incorporating cosmic dub! It’s a cool instrumental, but it will leave you scratching your head. ‘The Old Ones’ follows in its stylistic wake, with hollowed out vocals waving in and out of the mix like a windblown candle flame. The eerie melody is equally spectral, and may leave you shivering as the song advances. ‘Hollow Lands’ employs some effective guitar work in the backdrop, and it’s one of the prettier offerings here. The album’s coda is ‘Without Reason or Right’, and it features some swell guitar and organ, and has a nice cadence. In summary, I enjoyed this record and fans of Dead Meadow, Jason Simon’s previous solo work, and any of the genres mentioned here should gravitate to this record. Very nice!