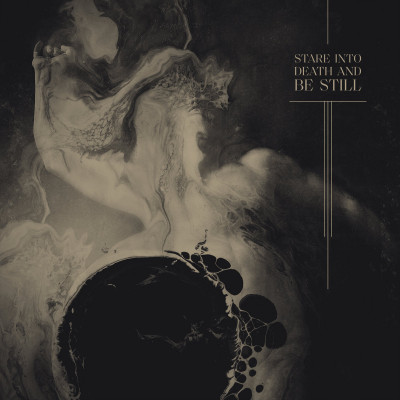 Stare Into Death And Be Still by Ulcerate

New Zealand tech-death legends Ulcerate return with their sixth album and first for new label Debemur Morti, a company synonymous with all things black and horrific. Returning with an injection of sweeping melody and their usual heavy atmospherics, Stare Into Death And Be Still marks what could be the band’s magnum opus out of an arsenal of already outstanding releases.

Stare into the gorgeously grim cover art from godly skin-beater Jamie Saint Merat and you will get an ominous feel of the death reverence that each track holds within its visceral and highly nuanced grasp. The black viscous spot bleeding into the albums art like a devastating tumour suggests it will be a harrowing spiral into the void and through intro track ‘The Lifeless Advance’ we get a glimpse of the dense and desolate landscape that Ulcerate want you to experience.

Four years since masterpiece Shrines Of Paralysis was released and the Aukland three-piece show no signs of losing that unique razor-sharp edge their brand of twisted music has. It’s hard to believe that a sound this thick with audial pleasures was created by just three individuals, all of whom are at the top of their game. Michael Hoggard’s unorthodox guitar work and string bending theatrics provide another virtuoso performance as his complex time signatures engulf the album in riff-heaven. Jamie Saint Merat’s command of the drum throne is almost unparalleled, watch him live and it’s near impossible to predict where his stick will next hit. Paul Kelland’s cavernous booming vocals still remain some of the best in metal and he dominates his way through both bass and voice performances.

The dynamic between these musicians is flawless and their unyielding aggression and unpredictability are weaponised to form destructive metal and suffocating ambience. You are contorted and consumed as whirlwinds of dissonant, angular riffage and blast beats pepper the sonic rager ‘Exhale The Ash’ amongst debris clearing melody. There is also deep emotion embedded in Ulcerate’s nightmares such as the pensiveness that permeates ‘There Is No Horizon’ giving this track an air of reflective despair. Perhaps the albums shining light though is ‘Visceral Ends’, with its foreboding ambience, crackling and cold distortion with strings that cry out over a doomed soundscape and the final moments which culminate in commanding blastbeats and portentous wailing guitars… “Exist for the visceral ends. No more than dust.”

Stare Into Death And Be Still displays yet another progression in Ulcerate’s musical direction with blast-beating brutality used more sparingly, appearing in sporadic outbursts and paving way for emotively invested passages rife with evocative riffs and deeper complexity such as the funereal march throughout ‘Drawn Into The Next Void’. This redefinition of their formula allows the trio more exploration of their song structures, expanding on their already masterful sound and polishing it to a new degree of maturity.

Ulcerate remain a force to be reckoned with and at this rate it’s hard to see them being knocked from their throne. This is fiery chaos with sublime order. Haunting and harrowing yet beautifully moving and cathartic… a personal journey. An album that is innovative from a band who always look forward and challenge convention. Spin this album with the commitment these guys put into recording it and appreciate it as one outstanding whole, a Dante-esque descent into the unknown. In these times of fear, isolation and ultimately facing one’s possible end, the world’s morbidity has forced us to challenge ourselves, to dig into our own psyche and reveal ourselves. In this state or torment we cant help but stare into death’s hollow black eyes with a new found respect.