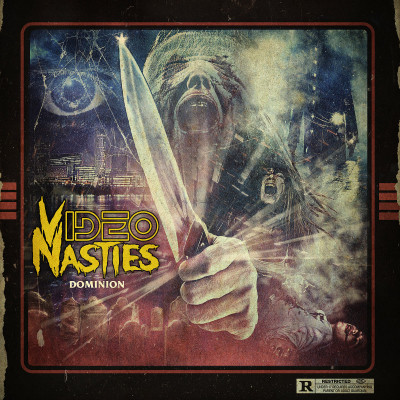 Video Nasties are an aptly named band as their music as is vicious as the content of the controversial 80s movies that were banned and have made so many people afraid and intrigued over the years. The Liverpool band count members who have served time in the likes of SSS and Iron Witch and combine blackened death metal with a raw rock n roll vibe to maximum effect. Video Nasties sound so vicious that you would think Mario Bava would be directing the band’s music videos and the music on their debut album Dominion is as perfectly executed as a slasher movie villain brutally slaughtering their victims.

Keeping up with the 80s vibes, Video Nasties sound like they take influence from the likes of early Carcass and Entombed, Cryptic Slaughter, Death, Possessed and the aptly named Evil Dead and mix it with Iron Monkey style aural brutality and it sounds immense.

Dominion kicks off with a horror movie staple (a trait that the album is packed full of for obvious reasons that adds to the whole vibe) and from then on in, it is packed full of blackened riffs and demonic vocals and doesn’t let up for a second. The macabre atmosphere that seeps out as the riffs and grooves crash about gives it an essential edge and above all, the songs here are executed with supreme precision. There is a lo-fi element to the albums sound which gives it a rawer vibe, especially on a song like ‘Transvoltum’, but this just adds to the charm of Video Nasties.

Elsewhere on the album, the likes of opening track ‘Stay Gold’, ‘Red Of Night’, ‘Viva Death’ and ‘Stabbing Nightmare’ are all great examples of the bands horrific sound and it sounds immense while the John Carpenter-esque charm of Dominions title track gives way to the closing stomp of ‘They Rise’ and ends the whole thing on a thrilling high, especially with the closing “Let the dead bury the dead” refrain. The whole album, it has to be said though, is one big trip from start to finish, packed full of memorable metal tunes alongside a a whole lot of creeping atmosphere and brutal vivacity.

Dominion is an album that is as nasty as it gets and does sound like it could soundtrack a gore filled slasher, but it also a lot of nasty fun and with this in mind, they definitely have made a record that would make Lucio Fulci and his peers proud.