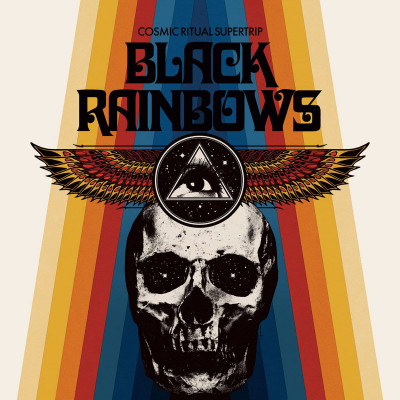 You always know where you stand with Black Rainbows. Defiantly unchanging in their attitude and sound, you can almost tick off their sound as a checklist. Loud dirty riffs? Check. Trippy space freak-outs? Check. Random B-movie samples? Check. It’s the bastard child sound of an unholy communion between Motörhead and Black Sabbath, and when it kicks into gear you can bet your holy backside that they are the greatest thing since sliced bread.

Of course, with such a drummed in sound they do run the risk of lacking inspiration sometimes, and this has shown in recent albums following the almighty roar that was Hawkdope. Seemingly stuttering, those past glories became a shadow of themselves, with the only true moment of inspiration being the recent solo release from frontman Gabriele Fiori. That release seems to have cleared some of the cobwebs from the rusty coils of the Black Rainbows machine though, as they come out all guns blazing on new album Cosmic Ritual Supertrip.

It’s business as usual right from the start with the no-nonsense riffage of ‘At Midnight You Cry’ and it’s songs such as these that Black Rainbows can throw out in their sleep. It’s just a warmer though for the more spaced out vibes of ‘Universal Phase’ whose fuzzed out bass pulls in all those classic Sabbath tropes. Samples seep in, making the turgid riff a little more interesting but the fun truly begins with the excellent ‘Radio 666’, which evolves from the bowels of the previous track like some phoenix rising from the ashes.

Other highlights are the heavy ‘Hypnotized By The Solenoid’, which is followed by the more laid back psychedelic vibes of ‘The Great Design’. The later ‘Searching For Satellites Part 1’ evokes Fiori’s solo release, whilst ‘Fire Breather’ brings in all those B Movie fantasies in a song about a a mythical big bird. What more could you want! OK, the album could be shorn of a couple of tracks, but then that is usually the issue with stoner rock, and in the main there is much to enjoy.

Go in expecting more of the same and you will get a nice surprise with Cosmic Ritual Supertrip, which is a fine return to form for Black Rainbows. It’s full of head down stoner rock, and plenty of trippy moments that set them apart. It’s hardly ground-breaking but then when you have a formula why try to break it. Good dirty fun from our favourite spaced stoners Black Rainbows.