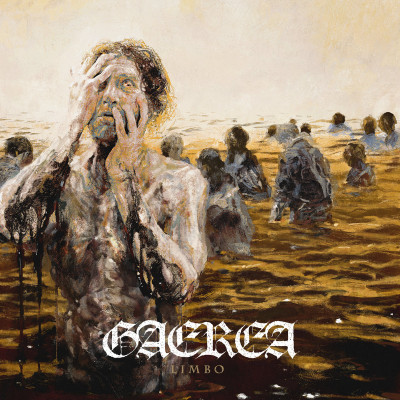 The mysterious black-hooded Portuguese phantoms Gaerea return with a long-awaited follow-up to their soul-flaying debut Unsettling Whispers, an album so stunningly significant, perfect in execution and immeasurable in praise that it was always going to be hard to top. Sophomore full-length Limbo sees Gaerea effortlessly elevate their presence further with flawless precision, both musically and artistically, capturing everything the band aim to convey through the bleak nuances of their sound. Stare deep into the simple yet striking cover art and you will see that the lost soul wondering in the dripping-black viscous mire has not one but two pupils in his uncovered eye. What this signifies is left to you the listener.

You couldn’t find a more fitting title than Limbo considering current world events and a word reflective of most of our collective mental states during this trying period. Gaerea often delve into the innermost of one’s psyche, clawing out the demons with cathartic blasts of aggressive mid-tempo extreme metal. The purge of unwanted pain is often the topic for the most extreme of bands and Gaerea take influence from some of the best whilst staying truly unique themselves. Hints and flashes of the avant-garde and DSBM, modern era Behemoth and even post-black metal all crop up to add a familiarity that is both reflected in the music and the albums sense of purpose.

In my review for Unsettling Whispers several years ago, I opened by saying that the enigmatic quintet may just be your new favourite band, and I will stick to that statement today. Gaerea’s unmistakable sound of raw blackened emotion has garnered its deserved praise and rightfully so. Not much is known about the five-piece apart from the identity of their outstanding drummer, whose name I wont mentioned out of respect, other than that it’s mostly guesswork and hearsay. As their mystique deepens new hordes continue to accumulate to worship at their void… and now so shall we.

‘To Ain’ is our first dizzying descent into madness, spiralling so wickedly into dissonant serpentine strings weaving through drawn-out weighty chords and building to an introductory crescendo of raw vocal torment, as if the vocalist is forcing out any unbearable cruelty. Charging blast beats pepper the eleven minute opus as well as more volatile ragers, fuelling the fire of this layered work of art. The beautiful whispered acoustic interlude adds touching respite to the outpouring of agony, a cathartic mixed bag of pure introspective emotion fleshed-out by the frontman’s impassioned performance. ‘To Ain’ is one of many stars illuminating Gaerea’s bleak and black vision.

The albums untethered beast is ‘Glare’, a near relentless sonic assault brimming with furious blasting and twisted avant-garde riffs. ‘Glare’ pushes you screaming through a dark hole and drags you back feeling enlightened, a sentence that could also sum up the entirety of this album. Gaerea pack this release with every ounce of fury that beats a war drum in their hearts, unleashing a magnificent display of head-banging and thought-provoking music. The grandiose and angular monster that is ‘Conspiranoia’ yet again pushes the boundaries further into the blackness of one’s thoughts as we are consumed by its pounding moments of fiery aggression and skin-peeling tremolo picking. The rest of the album does not require further explanation, but rather a listen to allow it to devour what horrors you wish to expel.

Limbo is Gaerea laying out the human condition in its rawest most fragile form, proudly baring their collective souls for the world to witness. Limbo knocks you breathlessly to the ground in a pile of purgative satisfaction with its lamenting honesty and brutal musical direction. Whilst it is melodic at times it’s mostly comprised of fierce and piercing moments of oil-black nuanced extreme metal, heavy on blast beats, harsh chords and violent riffs and all conducted by the most volatile and enthralling of vocalists.

The post-black influence seeps through the black metal veins throughout, as does the purge of suffering that comes with. Sometimes you just have to scream at the sky for that relief. Gaerea suffer for their art and do so with a passion which makes them so loved by their following. The word Passion is derived from Latin, meaning ‘to suffer’, and Gaerea inject equal measures into their music. Limbo can be seen as a harrowing journey of one’s self or as a collective being, either way it is an intense, dark and, after the procession of emotions, a joyous ride that many will connect to and fall in love with. The musicianship, the kinship of the members and the heart and soul that went into Limbo embodies everything a truly great album is made of. Limbo tears away the hopelessness of being and reveals inner peace through six flawless and punishing tracks through Gaerea’s own unmatched way.

The hype is real, the void is eternally black… and the reality is that Gaerea have once again delivered greatness. Is it too early to call Limbo the album of the year?