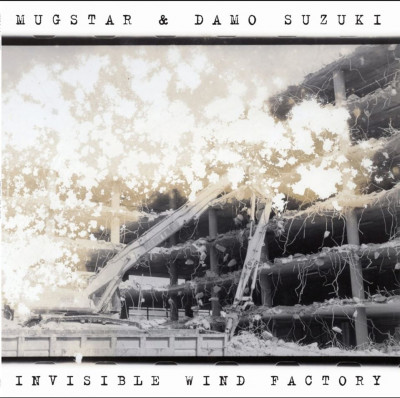 You gotta hand it to Damo Suzuki. Here is a guy who could be living off the past through his rather splendid work with CAN, yet has taken it upon himself to attempt to play with pretty much every band that has ever existed as a conduit for his weird garbled lyrics. At home in a festival hall or a backstreet boozer, as long as the “sound-carriers” allow it to happen, the muse is struck. It doesn’t always work, but we have to suppose that is the key to understanding what Damo is doing.

He is utilising the sound-carriers to try to find new ways of presenting his music. Almost a trial and error basis, mostly done with little to no rehearsal. It’s a very nomadic way and links in with the ethos of a travelling musician or bard, drifting from town to town in search of a story. That story eventually reached Liverpool band Mugstar, purveyors of some of the finest space rock this side of Hawkwind and they must have struck a chord with Damo as here we have a second live album, this time recorded from the Invisible Wind Factory during the WRONG Festival in 2018. Once again, it was a case of no rehearsal, and in for a penny in for a pound as they linked sounds and breathed out a psychedelic fury.

A fury is what it is too, and for just over 40 minutes the music swirls and bludgeons your senses as Damo provides his familiar warblings over the top. It’s no use trying to make sense of it all, and the key is to sit back and enjoy the noise as it happens, hoping for a moment of elucidation, although you may need to imbibe certain drugs to get to that point.

Released via Weird Beard on a limited run of 500 with 300 being pressed on “eco vinyl”, it preserves yet another moment in time on the Damo quest. Out of the many collaborations this easily stands as one of the best, if only because Mugstar tend to understand just what it is that they are seeking in the music. Having a history of exploring sounds, their cavernous sound matches perfectly with Damo, with him becoming more of a part of the band rather than the strange focal point which can happen.

It seems an age since we have heard anything new from Mugstar so to get this little stopgap is a nice treat, and as always they turn up the dial and overload your senses. The band have an innate sense of what makes a jam work, and within their familiar sound, they have threaded together a mystical path via Damo. The night in question must have been one of those moments in time where the stars align, and even in its preservation here, you feel a sense of energy which emanates from the very core of the music. That core being Damo, with Mugstar being the carriers.