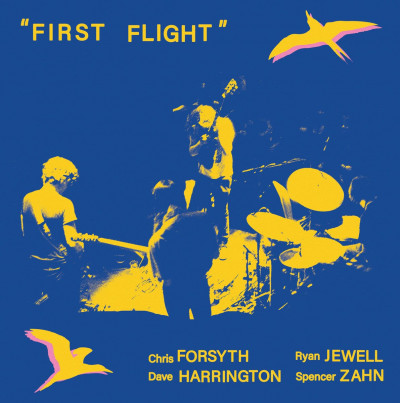 Recorded during his residency at the Nublu club in New York, these two jams represent the coming together of Chris Forsyth and Ryan Jewell with Dave Harrington and Spencer Zahn. Two sides of the same coin, these guys have been exploring and expanding music since they first set foot on stage, and with First Flight, sees them come together to explore possibilities and expansions of the mind.

Chilled vibes are plenty over these two jams, laid out for our delectable pleasure, and as they seek to open up new avenues of sound with an almost symbiotic relationship, you can almost feel the heady steam from the club stage as they guide each other down different paths. There is no beginning, or end for that mater, instead the jams are free-flowing connections to the mind, laying out psychedelic explorations and progressive mantras.

Underlying it all is an understanding of the blues and as Jam 2 rises into a heavy sweat, there are images of West Coast California jamming made good by Big Brother and the Holding Company, Jefferson at their bravest, and of course, the good old Dead. These are no reverential jams though, and instead you get intricacy and thoughtfulness, rather than disparate noodling, which provides an edge to these proceedings.

Of course, this is only a record of what happened, and is no way meant to reflect the true experience of being at Nublu. Pour yourself a whiskey, light up a doob, and close your eyes for a brief moment and those heavy vibes will surely take you away on a trip. Blues, jazz, prog rock…it’s all mixed up in a shuffling ambience which begs for further expansion of the mind. These guys remain so focused though, that any outside distraction is left to the four winds.

As a document of the time, First Flight is an interesting insight into the workings of these four musicians and what makes them tick. The album is unlikely to garner as many plays as the Solar Motel release, but for those wanting to either relive the residency nights, or for those simply wanting to sit back and let the jams roll over them then this provides a great diversion. It does what it sets out to do and takes you on a trip into the minds of four supremely talented musicians doing what they do best.