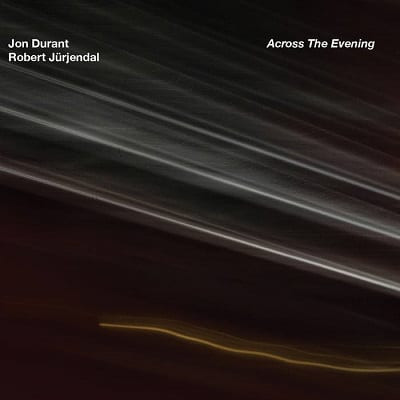 Across The Evening by Jon Durant & Robert Jürjendal

Quite an adventure that is worth exploring from the minds of Jon Durant & Robert Jürjendal. It takes you into the human minds, quiet cities, middle-eastern music, and sonic beauty. Across the Evening is a picturesque-consistency experience that takes you farther beyond the stratospheres of time and space. With help from trumpet player Aleksei Saks, percussionist Andi Pupato, vocalist Inna Kovtun, and bassist Colin Edwin, they lend the duo a helping hand to bring this album to life.

I had known about Robert’s playing when I first heard him on the 2016 release Lihtminevik/Simple Past featuring drummer Andrus Lillepea while with Jon Durant with his collaboration on Burnt Belief on the two albums; Etymology and Emergent. One of which was reviewed by Sid Smith from PROG Magazine and on Podcasts from the Yellow Room between 2013 and 2016.

Listening to this album, it’s like something out of the podcast sessions, Echoes with John Diliberto and out of the woods with Jeff Greinke’s Before Sunrise. For both Durant and Jürjendal, they’ve done their homework very well to bring their ideas to the table. When you set sail with the duo as if they’re captains aboard this mighty ship, you know something special is waiting for you beyond the horizon.

Like setting sail between the Mediterranean Sea and the Atlantic Ocean, Jon & Robert have upped their craftsmanship to take listeners on these exotic landscapes with a little help from Pupato’s arrangements. Sometimes they head into these mysterious parallel universes with echoing cries from Saks’ trumpet.

It is hypnotic to see where the next step on the tracks they would walk into. Rescinding between the sounds of Brian Eno’s Another Green World, Sonar, and the surfaces of Markus Reuter, it can be eerie, disturbing, surreal, and ambient. Across The Evening was worth exploring for my delicious cup of coffee. It is quite the journey to discover this year.

This album isn’t just a multi-dimensional album, but travelling through the outer limits as if they’ve taken you to places like you’ve never seen them before.