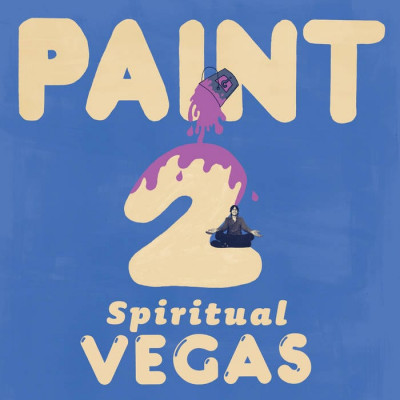 If you are following the independent rock scene, you’re probably quite familiar with the guy standing behind Paint and his latest album Spiritual Vegas. It is Pedram Siadatian,  guitarist and songwriter from Allah-Las.

What started out as Pedrum’s fun home studio demos turned into a full-fledged project. This development is certainly reflected here on Spiritual Vegas – from brief song miniatures to full-fledged five-minute workouts. At the same time, the project also ranges from just solo Siadatian to ‘outside’ help from members of his band and other musicians.

Musically, Paint is firmly located into that late sixties domain dominated by the likes of Ray Davies and Kevin Ayers. That could seem like a contradiction since Davies was never a big fan of Ayers and his whimsical style, Siadatian has obviously decided that such a combination can work.

And frankly, it certainly does! Paint doesn’t remove any signs of Allah Las, it just places those signs further into musical left-field even with its references to poets like William Burroughs and Allen Ginsberg and singing ‘Ta Fardah'(’Til Tomorrow) in Farsi, relating to his Iranian heritage.

Throughout, Siadatian in no way leaves his songs in a demo mode, no matter how sparse they might be instrumentally. All sixteen tracks here are well thought and worked out and function on both musical and lyrical level, with ‘Meet Me(In St. Lucia)’ being a particular stand out that would make late Mr. Ayers very proud.

Essentially, Spiritual Vegas is an assured and accomplished album that goes beyond being a side project.