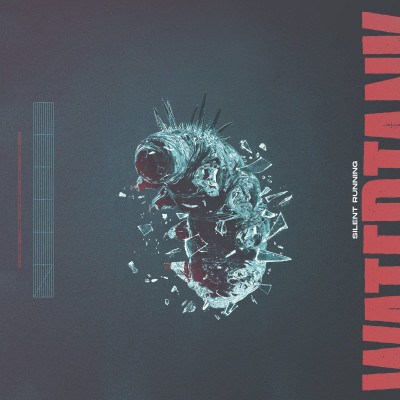 Hailing from Nantes, post-hardcore, noise rockers Watertank caught my eye by declaring their songs would “surely dazzle fans of Torche, Helmet and Quicksand”. I’ve a soft spot for Torche’s ability to blend great pop melody with thick sludgy guitars and there are occasions on Silent Running where you would easily believe it was Torche you were listening to. Superbly recorded and mixed by Patrice Guillerme, the band experienced some line-up changes along the way, but this seems to have been a good thing. Guitarist/singer Thomas Boutet has a superb voice and a ludicrous way with melody, knowingly pitching just the right balance between riffs and tunes.

Hurtling out of the blocks comes opener ‘Envision’, bursting with snappy riffs and honey toned vocals that flitter and fly around effortlessly hooking you in. One part Foo Fighters, one part Torche. The rubbery riff that permeates through ‘Suffogaze’ recalls Betty era Helmet while Thomas comes across like a fired up Perry Farrell. Indeed, the breakdown parts and guitars have the same kind of tender/fury transition that Dave Navarro creates. ‘The Ejector Side’ again leans on the Foo Fighters for inspiration and Jane’s Addiction for the soaring chorus.

Mixing up laid back verses with charged choruses, ‘Silent Running’ teases and pleases in equal measures. ‘Spiritless’ rumbles menacingly in between bursts of math rock tempo changes that stutter and splutter a little too much for my liking, but then the chorus ups the metal content and is as wondrously melodic. If Pixies had more of a metallic urge ‘Timezone’ would potentially be something they’d conjure up, the soothing vocals in the chorus adding a sugary goodness to the mix. The surround sound keyboards add an atmospheric end to the song.

You could play me ‘Beholders’ and tell me it was a new Torche song and I would be in raptures. The chunky ascending riffs and surging guitars blend effortlessly with Thomas’s superbly melodic vocal line. ‘Thing of the Past’ leans more in favour of piling on the riffs than creating melody before turning into an interlude of backtracked experimentation. Bouncing along with choppy drums, powerful bass and a ripper of a chorus, ‘Building World’ makes me wonder why Watertank aren’t filling stadiums. (Pretend there is no pandemic and this actually happens).

Finally to the album’s closing track, the clean guitars on ‘Cryptobiosis’ mimics Gene Loves Jezebel’s 80s near-hit ‘Motion of You’ and Def Leppard’s ‘Hysteria’. The soaring chorus is the best of the bunch as it flies high. Throw in some poptastic keyboards and hey presto! there’s a massive hit in the making. It’s a seriously neat trick to pull in so many other songs and spin them into your own thing of wonder. When that saxophone starts squealing, it’s magical and you realise they really are throwing everything into this superb finale to the album.

Watertank are a completely new band to me, Silent Running is their third album and aside from a less than appealing band name and non-descript artwork, they have impressed me a great deal. The world can’t have enough bands like this in my opinion and I heartily recommend Silent Running. If you do indeed like Torche, then Watertank will float your boat as they have a tremendous way with melody and big chunky riffs.