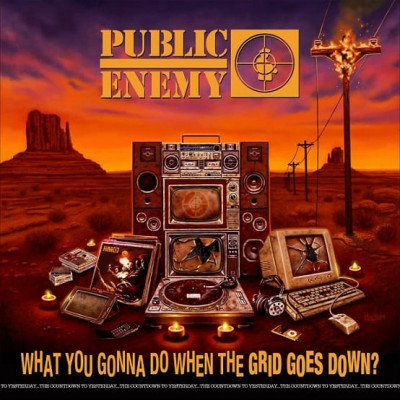 What You Gonna Do When The Grid Goes Down? by Public Enemy

Back in 1987, Public Enemy were a serious force to be reckoned with. Their classic album It Takes a Nation of Millions to Hold Us Back was lyrically and musically one of the hardest hitting albums ever recorded. The images of the band, with the military attired S1W’s caused some people in the media to shit themselves in fear. Chuck D’s imperious delivery was a rallying cry to rise up against racism and empowered black people to learn about their history. It wasn’t just black people who became intrigued to what Chuck was saying, this Def Jam act also crossed over to open minded white folks who were curious. That was my introduction to the band and 1990’s Fear of a Black Planet, in my opinion, was the stronger of the two records, the message still hitting hard over ferocious beats and samples.

The hype surrounding What You Gonna Do When The Grid Goes Down? is that it’s the band’s first album for Def Jam in over two decades. Public Enemy have been steadily putting out albums in that time, albeit with mixed results, they have never been able to match the quality of their output on Def Jam. So will this album manage to come close to those vital records? Once again calling in a host of guest rappers, we should remember there was a time when Chuck, Flavor and Professor Griff were the only voices to be heard on a Public Enemy record. They didn’t need anyone else.

Opening with the impressive ‘GRID’, a powerful funk groove featuring Cypress Hill, calling out how the world seems to be falling apart through the chaos and fear brought on from social media and the evil people behind it. Chuck questions “We all caught up in the web is so true, no GPS what will you do? No e-mails or Whatsapp coming through, now your phone is just a phone with a camera, no algorithms…to manage us” and the line “Digital mental health clinics worse than a pandemic” sums up where a lot of people sadly find themselves.

Then it’s the previously released ‘State of the Union (STFU)’, featuring slamming beats reminiscent of ‘Shut ‘Em Down’, the tempo may be slower but the sound is as hard as ever with a kooky loop that burns into your brain. This time the rage is aimed squarely at Donald Trump, a fired up Chuck rallying with “Whatever it takes, rid of this dictator, POTUS my tail, ass debator, primetime, preemo, rhymetime, crime like no other, in this lifetime, White House killer, deadin lifelines, vote this joke out, or die tryin”. Paraphrasing the election slogan Chuck goes on to snarl “Make America great again, the middle just love it, when he wanna talk, walk y’all straight, to them ovens we be, human beings of colour suffering”. It’s a good start to the album.

‘Public Enemy Number Won’ is a re-jigged version of an earlier track, this time with a sampled introduction from the Beastie Boys. Terminator X brings some old skool beats and sample skills while Run DMC make a guest appearance. It’s a heartfelt shout out to the good times of early Def Jam days when hip-hop had characters that relied on their vocal/sampling skills unlike the shit that constitutes a lot of hip-hop and rap nowadays.

But then things unfortunately take a turn for the worst, the swampy ‘Toxic’ really drags and the lyrics have no real meaning that I can decipher. From early days of just having a DJ spinning out the grooves, Public Enemy mutated into a full-on live experience with musicians playing actual instruments. This enhanced their shows in terms of physical dynamic and an organic sound and how they presented their songs, but this live sound also infiltrated their albums, the results of this often left me unimpressed. ‘Yesterday Man’ is a prime example, with some hideous metal guitar infused over the sampled beats. Featuring Daddy-O the diatribe this time namechecks the Kardashians and any intended message there may be is dissolved as every line is inexplicably punctuated with “what happened?”.

Forever a classic track, ‘Fight the Power’ appeared in the Spike Lee film Do The Right Thing, that unfortunately is as relevant (in terms of what is happening) today as it was 30 years ago. My initial thoughts would be to leave the track alone, for fear of turning it into something less enthralling. This updated version, featuring Nas, Rapsody, Black Thought, Jahi and YG (I have only heard of Nas) doesn’t enhance the original but doesn’t fuck it up either. With the menacing ‘Hot Pants’ sample still underpinning the track, there’s a change in the lyrics from each of the protagonists. Nas aims a headshot with “The information age got ‘em seeing what’s really wrong with these racist days, honour the strong and pity the weak, your thoughts run your life, be careful what you think”. Rapsody delivers an impassioned and direct “Police think they reign, sick none over the law, wanna give us short sticks, but we really Nia Long…The value of black life the cost of going to Wendy’s for a 4 quarter burger ended in murder, fight for Breonna and the pain of her mamma”, a reference to Breonna Taylor, shot dead by police in her home.

Jahi also references this tragic killing and the character from Do The Right Thing murdered by cops with “Our fight and our rights for freedom will never waver, justice Breonna Taylor, salute Chuck and Flava, fell the same anger since Radio Raheem died, black power to the people, push forward pride”. When it comes to YG, the lines “Cops don’t give a damn about a negro, pull a trigger kill a negro he’s a hero, fuck living life on welfare, the last one who cared was Obama care” lament a President who gave a shit and tried to make a change for the better. Noticeably Chuck D’s verse isn’t changed from the original reminding us that the power is still being fought after all these years.

‘Beat Them All’ is another booming set of hefty beats and stabbing samples provides a head bobbing groove that is what I want to hear more of. But after the raging diatribe in the previous track, the lyrics “But WTF is the problem? That your world ain’t solving, where your planet dissolving, corporations replacin’, what y’all call a nation, playin’ wit’ population” amounts to not much more than badly rhymed soundbites. ‘Smash The Crowd’ is a stomping groove with some freaky samples that carry more weight than the lyrical content, Chuck opening the track with “Haters gonna hate, fakers gonna fake, breakers gonna break, neophytes gonna make mistakes, sleepers gotta wake, I’m a say it again, I’m a say it loud, gimme a group, not one man to smash the crowd”, which makes zero sense to me. Ice T randomly appears with the incisive “Ice with the enemy, Iceberg’s the enemy, masters of the mosh pit, hardcore rap shit, black mask shit, pop off get your ass kicked”. Is that the best you can come up with? Seriously?!!

‘Go At It’ is another generic metal/rap crossover that offers nothing musically that I want to hear again and with an opening gambit of “It got the summer, written all over it, it is time, time for it to happen, WTF is it? Some still can’t deal with it, kill fast until they kill it, DJ Lord Public Enemy, they be kill’ it” you lose interest to keep up with whatever else is being said. Chuck completely runs out of things to say with the lazy “Sometimes belief in me be all that I need, I know it, so be it, it be so, so it be, never ask for it, it’s just me being me”.

The downbeat ‘Rest In Beats’ is a shout out to all the dead rappers from the past over a funereal backing track that has some of those modern beats that I detest as they’re so limp and synthetic. They tickle your eardrums instead of shaking them. Prince gets a verse of his own though with the poetic “Never cared how doves cried until I heard you died, now I wanna forget and God knows I tried, I wished you heaven, I hoped that you heard me, we were undisputed there was no controversy, tired of the changes that life seems to bring, never feared for silence the dead still sing, and we can celebrate by dancing in the streets, your music, your legacy, rest in beats”. The guitar solo that copies Prince’s style is also a touching tribute.

Album closer ‘R.I.P Blackat’ is a Flavor Flav jam that allows him to pay homage to a friend who once helped him get himself back on the straight and narrow. But the groove over which he relays this heartfelt homage really limps along. I want the album to end with a final flurry to remind me of former glories and it fades away leaving me hugely disappointed.

So there we have it, I wanted to be able to tell you that Public Enemy’s return to the label that saw them deliver some of the most engaging, exciting, vital rap records in history, would be some sort of return to the greatness that permeated those albums. Instead, we have an album that relies too much on other rappers and the continued insistence to allow studio musicians to create instrumental backdrops that are lame and generic. Chuck still has a powerful voice that booms and startles, albeit his delivery isn’t as furious as it once was, but his rhymes have become tired and lacking in coherent message. This is all the more of a failure considering the shocking state of America right now with racial hatred and intolerance one of the key elements in the country’s destruction. It pains me to be less than complimentary about the world’s greatest hip-hop act, I take no pleasure from doing this, but this album is just so disappointing. To paraphrase one of their classic songs, don’t believe the hype.