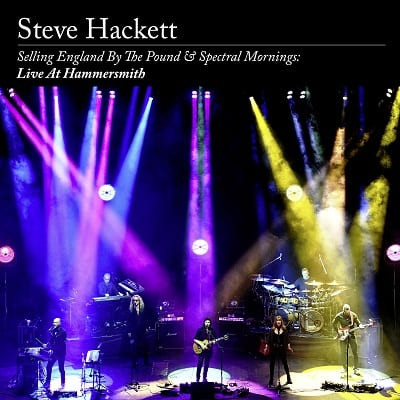 Selling England by the Pound and Spectral Mornings: Live at Hammersmith by Steve Hackett

“Can you light a fire in Winter’s face?/Or say why a life has gone to waste?/Pleasure Island was an overcrowded place.” Recorded last year to a sold-out crowd at the Hammersmith Eventim Apollo which was the final night of the Genesis Revisited tour on November 29th, Steve Hackett brings everything to a standstill on this 2-CD live set from the InsideOut label. And after listening to the Hammersmith recordings, it is almost as if the flowers themselves are ready to bloomed.

It was during that time frame he was promoting his 25th studio release At The Edge of Light. However this recording showcases Hackett at his best. Not only keeping the legacy of the original Genesis alive from 1971 to 1977 when he joined and departed, but to keep the flaming fires burn brighter than ever! The first and second act contains Spectral Mornings, At the Edge of Light, and the entirety of Selling England by the Pound.

‘Under the Eye of the Sun’ gives Jonas a chance to have his Rickenbacker bass to create these galloping sounds as he follows Craig Blundell’s exercise while the vocals continue the search the trails inside the burning sphere’s hot plasma. Elsewhere, Rob Townsend’s sax fills the reverbing doom inside the Hammersmith as Steve gives him pointers to do these attack modes by eating its prey.

‘Déjà Vu’ was originally written during the sessions for the Selling England-era in 1973, but wasn’t finished. But for Steve who brought the song back in 1996 with the original Genesis Revisited project, but with the live version here, it has given the audience’s stamp of approval. Both Steve and Nad have given the warmth of resurrection for the unsung gem by bringing it towards the light at the end of the tunnel.

‘The Virgin and the Gypsy’ shows that Steve still has that melodic vocals that he brings by returning to the Spectral Mornings period as he plays beautifully with his rhythmic chords on his 12-string acoustic guitar while the band members work together as a team by taking the crowd on their spiritual journey with them. Both ‘Fallen Walls and Pedestals’ and ‘Beast In Our Time’ are swarming harder vibes to go into heavier territories that audiences are embarking into.

You have the keyboards going into some of the string sections as it goes into the middle-eastern areas of India before entering the classical folk structures of a waltz. But then the cheers and clocks ticking with insanity on ‘Clocks – The Angel of Moth’ gives the Moog and mellotron into this paranoia state for Roger King by waiting for the right moment to erupt at any second as Hackett goes bat-shit crazy as he makes his guitar go into the towns of arpeggios. Blundell’s tidal-wave drumming swings into action as Steve lets him come forward by making his instrument intense. And it is pretty damn good. He keeps marching on before they end into a wildly crescendo end.

With ‘Firth of Fifth’ it’s more than just an incredible 9-minute epic, but with some great improvisations done by Rob Townsend. He not only adds a little touch to the piece, but uses the sax instead of the flute. He’s not trying to re-write history, but he wants to add that twist of the lemon flavors by adding some Crimson-sque vibes in his midsection segment of the classic composition. It really has taken a new leap forwards for the crowd to clap along to the piano, bass drum, synths, and Steve’s tapping textures to keep the golden-era of Genesis alive and well.

Speaking of midsections, on ‘I Know What I Like (In Your Wardrobe)’ the band members walking into a BeBop carousel-jazz sequence thanks to Townsend’s improvisation as he and King’s organ walk into Monk’s territory. They’re having a ball dueling it out by racing towards the finish line as they are continuing more and more for Hackett reaching those frets like crazy.

Now with Nad Sylvan, I didn’t know what to think of his singing. I had no idea if it clicked with my ears or not. He’s been around making music since the 1970s between both the punk and progressive rock scene, Unifaun, Agents of Mercy, and his solo albums, I was really impressed with his arrangements on what he’s done on Live at Hammersmith. With both Gabriel and Collins’ arrangements from ‘Dancing with the Moonlit Knight’, the folky struggle to carry on with ‘More Fool Me’, and the thunderstorm killer ‘Dance on a Volcano’, he hit it out of the ball park with them. Since joining with Steve Hackett’s Genesis Revisited in 2012, he makes sure that the flaming fires doesn’t hit the salty waters to be burned out.

‘Tigermoth’ feels like as if you’re inside a dream. And in there, it becomes mysterious, surreal, and very dangerous. You have these church organs, mellotron choirs, with crying guitars that delve into an eerie lullaby as ‘The Battle of Epping Forest’ goes into the march of the battlefields between the rival gang leaders. You can tell Jonas is channeling Mike Rutherford’s double-neck guitars before the catchy and brutal scenarios take you into the warzone as Rob uses his sax to play the synth riff sections that Tony Banks had done before. Nad’s theatrical movements add the intensity before going into this Victorian steampunk time machine and heading back into the zone once more to find who will own the land of the forest.

Live at Hammersmith is an adventurous live journey. I have to say that Steve has kept it going. This was something I wasn’t quite sure on the Genesis Revisited project, but I’ve always wanted to check out after hearing Genesis Revisited II back in 2012 when I was in College. And I thought it was pretty good, and then I had completely forgotten about it.

Now here, this was a very interesting recording. And it’s not just blown away, but that Steve Hackett has shown no sign of slowing down. So prepare for your front-row ticket to be at the Hammersmith. Okay, where’s my Tesco shopping list for English Ribs of beef cut down to 47p lb and Table jelly’s at 4p each? I knew I had it somewhere for a giant grocery shopping list to make a hot and delicious meal tonight.