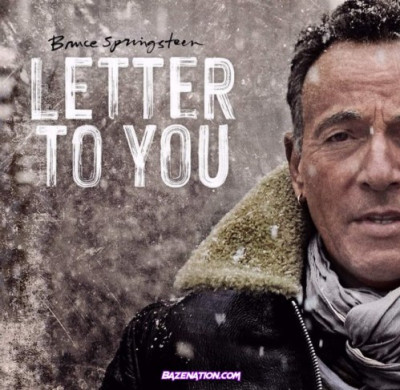 Letter To You by Bruce Springsteen

If ever a lyric summed up the ethos of Bruce Springsteen and the E Street Band, it comes on this, his 20th album, and anyone who has stood in the vicinity of the band as they roar through their regular three and a half hour live sets, the words “By the end of the set we leave no one alive” will ring true. The song in question, ‘Ghosts‘, is both a celebration of both the live show, but also a nod back to members who have sadly left. Here, on Letter To You, Bruce is in semi-reflective mood as he ponders his own existence in line with his career.

Not that there is anything maudlin about this, and with this being an E Street Band record, the music is full of the celebratory glory and band of brothers sound that defined the sound of Springsteen through the years up until the success of Born In The USA. Recorded over the space of four days (with the fifth given over to listening to it), the raw, live feel is evident throughout albeit brushed up with a wonderful Ron Aniello production. It’s that wall of sound that anyone who has witnessed E Street live will immediately recognise.

Unusually for such a loud band record, the songs are quite personal. Springsteen made a career out of writing about blue collar characters, yet here he uses all that experience to reflect on his own journey. Having already delved deep into his story with the Broadway shows, this is the sturm und drang version where he pays particular heed to the ones who have left the stage. The ghosts of Danny Federici and Clarence Clemons are all over this album, notably on three older songs ‘If I Was The Priest’, ‘Janey Needs A Shooter’, and ‘Song For Orphans’. But it is the new ones on which we get a sense of how they still stick around in spirit. There’s a wonderful moment on last song ‘I’ll See You In My Dreams’ where Bruce seems to be singing directly to his lost friends. ‘Last Man Standing’ is even more personal as he reflects on the death of George Theiss, leaving Bruce as the hitherto last man standing from his original band The Castiles.

With this comes a deep sense of goodbye but maybe that is the perspective offered by age. Each and every member know that this may be the last time and make it count once again. The E Street ethos is to play the best show ever, every time, as there is always someone in the audience who is hearing for the first time. That ethos stands tall on Letter To You and drives the album forward. ‘Burnin’ Train’ is a typical E Street rocker, ‘Rainmaker’ is them at their most political, and just who is the rainmaker, or indeed the criminal clown. Many expected Springsteen to unveil a political album in an election year but the knowledge that this is somewhat peripheral compared to a lifetime of experience and loss, has resulted in an album which will remain undated for a long time. The songs here are urgent, yet imbued with a glorious melancholy. The wonderful understated piano of Roy Bittan being the absolute key to it all.

Perhaps the defining feature of Letter To You will be that it was released during a time of great distress. As the Covid virus ravages the world, it is indeed a time to hold your dear friends closer and for Springsteen to release a full E Street Band album is more a case of wrapping his arms around his fans and saying he is here for them. The famous story goes that just after 9/11 a fan bumped into Bruce at a parking lot and said “man, we need you right now”. That sentiment is echoed right back at him and long time fans will absolutely revel in this album. It may not match the audacity of Western Stars, a late career masterpiece if ever there was one, but for those wanting Bruce and the band to kick out that heart-stopping, pants-dropping, house-rocking, earth-quaking, booty-shaking, Viagra taking, love-making, legendary E STREET BAND sound then they wont be disappointed. All that is required now is for music to be allowed to tour again so we enjoy these songs in their natural environment, on the stage.