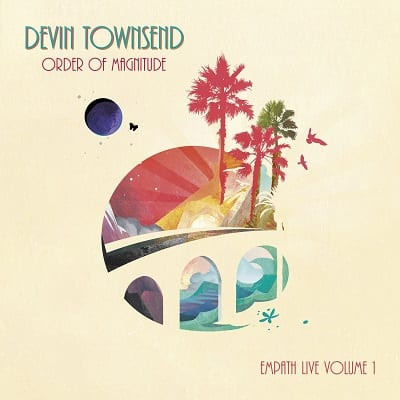 Recorded last year on December 12th at the Roundhouse in London, Devin Townsend embarked one of the most ambitious live shows in support of his latest album, Empath, Order of Magnitude is one of the first volumes that Devin has unleashed on the InsideOut label. And what he’s planning to do for the touring Empath cycle is dividing up into three volumes.

The idea is to make sure that there’s no backing tapes or click tracks that had been used to bring the kaleidoscopic racket in his head. It would be Devin and a creative team of musicians lending a helping hand together by going tight and not go off the rails, or just go batshit crazy to have some fun. With the who’s who on here that includes Zappa alumnus drummer Morgan Agren and guitarist Mike Keneally along with Stick Men’s Markus Reuter, Haken keyboardist Diego Tejeida, vocalists Samantha and Anne Preis, and Annabella Packford to name a few, this must have been one hell of a line up for Townsend to pick the best of the best and being a part of the Empath journey.

The thing I loved about Order of Magnitude is how Devin interacts with the audience. This was recorded during Election Day in the UK. And this was a break for them to clear their heads from watching the same fucking shit on TV and have a lot of fun with Devin Townsend. And it was a night they’ll never forget. Plus not forgetting Devin’s sense of humor. And that’s what every concert should have, not just the music, but having lots and lots of fun. From the roaring introduction between heavier riffs, reggae, classical, and mournful textures, ‘Borderlands’ gives audience a chance to go on vacation with Devin and his family. He’s very much like a conductor by giving each member and Che to chime in at the right moment with some unexpected twists.

The last four minutes delves into this Calypso turned ambient awakening with vocal effects of ‘Touch Me’ with the lines “I wanna wake up where you rise / I want to take you to the light / with all their frantic run around/and all they want is to be found.” Devin is taking them on a spiritual journey before returning to a symphonic metal galaxy on a high note. “I am going to go to War against my inability to shut the Fuck up!” from Morgen and Devin’s militant introduction wearing Hawaiian shirts, three vocalists march to the beat, and Devin having a ball, there is the cross between the Italian prog genre and the James Brown vibe with some cookie monster vocals thrown in. The live album has only just begun.

Both Ché Aimee Dorval, the Pries sisters, and Arabella Packford keeps the tempo’s chugging as Che goes into this soulful groove with a mid-swing section as Devin asks the audience “you say you wanna get high” and they respond with a cheer as the chaos ascends as ‘Gigpig Jam” is where Devin gives some of the members flexibility. I can hear Markus at times by taking the Roundhouse into the dark side as he and Morgen go into this intensive mode on his drum kit for the levels to increase even higher as Townsend speaks like a preacher to give the crowd a big stamp of approval.

‘Ain’t Never Gonna Win’ is the band going into fusion town. Morgen and Diego transports us into David Sancious’ ‘The Speed of Love’ and Jan Hammer’s arrangements with ‘The Noonward Race’ before segueing into this voyage of the ‘Deadhead’ from Devin’s sixth studio album, Accelerated Evolution. The eerie effects before the beast-like guitars sets up the attack for some clapping rhythms. This gets you up and running with tidal wave drums, keyboard strings, dooming textures, and snarling vocals, Townsend brings everything to this screeching halt and I can imagine the audience have their jaws dropped throughout the song. ‘Why?” is a waltz that channels both Edenbridge and The Resistance-era of Muse.

Starts off chaotic, kind of giving Disney the big giant middle-finger with hay-wiring strings, guitars, and drums going all over the place. The crowd sings along to Devin’s operatic arrangements and lends some help. Participation is always need to give the death metal roar as I call it, the Cookie Monster vocals. They’re in the school of Devin Townsend with proper music education done right.

‘Lucky Animals’ shows Devin’s touch to the ‘60s girl groups from the Epicloud album. Almost similar to the Shangri-La’s ‘Remember (Walking in the Sand)’ as it shows that he’s more than just a metal god by pouring his heart and soul as the snarling vocals hit at the right exact moment to go into ‘Castaway/Genesis.’ With ‘80s synths for a brief second, it erupts into a fast-speeding brutal force between guitars and drums channeling the Beauty and the Beast sections like there’s no tomorrow with an exercise section that the bass goes into funky town while Morgan lights up the roundhouse before heading into a spiraling end for the audience’s approval.

‘Spirits will Collide’ is the calm after the storm. It tackles with themes of depression. With its acoustic ballad, I can imagine there wasn’t a dry eye in the Roundhouse. Ché, Sam, Anne, and Arabella help close out the night with a chance to keep holding on and never letting go of that bright light that leads yourself out of those tunnels that we’re stuck in. For Devin, he gives Ché a chance to shine into the forefront on the stage with her take of the Trammps’ ‘Disco Inferno’. It shows not only his sense of humor, but having the floors transform into a disco border party to dance until dawn. It was unexpected hearing that on the live recording, but it works!

Order of Magnitude: Empath Live Volume 1 is Devin’s grand slam. While we’re living in tricky times with being in quarantine and with COVID-19, we all need a break from that and this here is a sign of hope to move away from the struggles, stress, and panic attacks to have music in our lives and have Devin in our household, is quite the achievement.