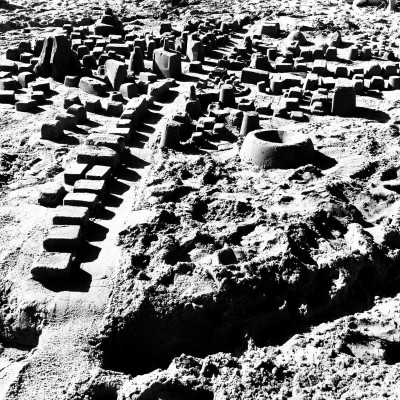 Twenty Twenty by Gone From My Sight

Dark? Well, it can always get darker. Possibly that is what Gone From My Sight, the duo of Quinn Raymond (guitar, bass, synths, programming), Keith Watts (drums, programming, synths, piano, vocals), thought when they were naming themselves as a band. You see, Gone From My Sight is the little blue ‘how to book’ that hospices give to the dying that enters through their doors. How’s that for dark?

On the other hand, they have come up with a very promising album in Twenty-Twenty. That is, if you favor a lo-fi electro-rock that certainly has its roots in equally dark-tinged bands like Radiohead, Nine Inch Nails, that musically lean towards a somewhat stripped-down version of LCD Sound System. That stripped-down part comes from the fact that parts of the album, besides the studios in Brooklyn and Queens, were recorded in bedrooms, hotel airplanes… Bedroom pop stretches into new spaces, I guess.

So what does it sound like, after all? Essentially, as Raymond and Watts describe themselves: “Basically, it’s lo-fi indie synth-rock with handclaps and an 808, and a very sad, paranoid voice wondering why we’re all here, where we’re going after, and if it even matters. The kick drums thud slowly but loudly like beating hearts, and of course, inevitably fade out.”

A bit pretentious? Well, not really. The fact that the duo started out as session musicians certainly helped them hone their craft before they even started out to make their own music together. And with all the cited influences and comparisons it actually does sound like their own music.

Essentially, on Twenty Twenty, Gone From My Sight give us some quite sophisticated, thinking man’s electro-pop that shows some excellent promise.