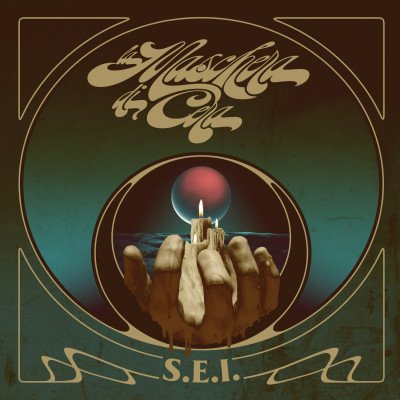 It’s been nearly 20 years since La Maschera Di Cera formed in Genova, Italy. It originally started out as a project by Fabio Zuffanti (Finisterre, Hostsonaten, Aries, and La Curva di Lesmo). Taking aspects from the Italian masters such as il Balletto di Bronzo, Museo Rosenbach, and Le Orme to name a few. Zuffanti wanted to honor the golden-era of the Rock Progressivo Italiano genre of the 1970s.

I first became aware of the band’s music back in 2010 in the first of the Romantic Warriors: A Progressive Music Saga series by Jose Zegarra Holder and Adele Schmidt. They covered the genre and covered bands such as Cabezas de Cera, Deluge Grander, Phideaux, Cheer-Accident, and D.F.A. not to mention some of the performances that were shot at ROSfest (Rite of Spring Festival), ProgDay, NEARfest, and at Baltimore’s Orion Sound Studios as well.

That was where I became hooked into La Maschera’s music when I bought their 2013 album, Le Porte Del Domani (The Gates of Tomorrow), which was a sequel to Le Orme’s 1973 classic, Felona E Sorona. It proved to me that Prog wasn’t just a four letter word, but going beyond the big names such as Yes, Genesis, and ELP, and into the bands that made more sense. From Metamorfosi, Banco, Murple, Osanna, Latte E Miele, and Quella Vecchia Locanda.

They were making more sense to me from the Italian genre. It was more than just singing about Lord of the Rings, Fantasy lyrics, King Arthur, and Dungeons & Dragons. But with the Italian Progressive Rock genre, it covered such stories as Charles Darwin, the Supermen by Nietzche, two planets one with love and the other with sorrow, Dante’s Inferno, and a penguin moving away from its natural habitat by paying the ultimate price as a circus performer and living in a small plastic iceberg in a Zoo.

La Maschera Di Cera have really taken their level to a bigger approach with their seventh studio release this year on the AMS Records entitled S.E.I. The album’s acronym is “Separazione/Egolatrial/Iganno” (Separation/Self-Worshipped/Deception). It is based on imaginative keyboards, time-changing textures, intense wind sections, and distorted bass that makes up the absence of the electric guitar, and Alessandro Corvaglia’s vocal arrangements that is like a tidal wave waiting to happen. Is S.E.I. the band’s finest for this year after a seven long year wait? Well, let’s take a look.

‘il Tempo Millenario’ opens the album off with some intense bass, drum, and organ parts that go into some form of attack mode with some heavy distortion. Floating acoustic guitars, mellotrons, synths, and flutes going into this folky isolated structure for Alessandro tackling on the hope to go inside this massive temple before chaos assumes again.

The Bass and Piano go into this cat-and-mouse film noir structure as the mellotron and organ sends us into this glowing light that is coming closer than we expected with Martin Grice’s (Delirium) dancing steps as he blares out his saxophone to receive a message inside the temple. Corvaglia, Maror, and Zuffanti go into this hyper-drive extension by giving Alessandro some theatricality on what is happening before Paolo Tixi (il Tempio Delle Clessidre) and Grice bring everything to an operatic standstill. Zuffanti’s bass is revving up those distorted sounds as it rises up more and more with a glorious sound while Alessandro and Grice set up this calming atmosphere, but knowing that things are going to be different around here once they leave the temple.

‘il Cerchio del Comando’ starts with a musical chairs motif at first with Macor, Grice, and Zuffanti taking turns to play this melodic riff as they return back to the parallel universe of Felona E Sorona thanks to the acoustic and percussion grooves by returning to the happy planet of Felona once more. The textures are a little bit intense by the foot of some waltz textures with a celebration of joy that is upon us.

‘Vacuo Senso’ closes the album with the mellotron taking us into this empty ghost town that shows a little bit of a nod to Igor Stravinsky’s ‘Firebird Suite’. Grice takes over in the midsection by paying tribute to John Coltrane’s ‘My Favorite Things’ as the band give their love and support to the forefront of both Bebop and Avant-Garde Jazz. Once it goes calmly with a lullaby section, the distorted pick bass comes kicking in with a blaring sax, followed by an overdriving composition from the organ itself.

S.E.I. is La Maschera’s welcoming return for 2020. Was it worth the wait for their return after a seven year long wait? Yes! They’re back in action once again to clear up the rough situations from what is happening in this year so far.