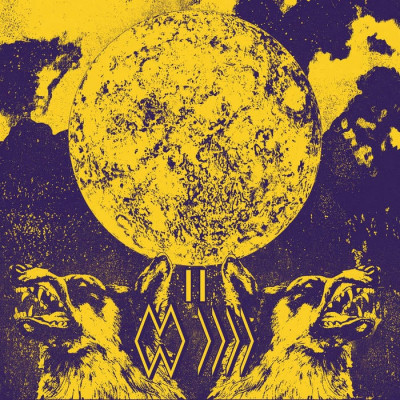 Bezerkir II by The Band Whose Name Is A Symbol

The Band Whose Name Is A Symbol are not really like any other band. Never ones to follow an expected path, they may release what you might call an actual album with a clear definite purpose, but once this is out in the wild, there often follows a kind of afterbirth as they are swiftly followed by whatever else came from the album sessions. Providing both an intriguing glimpse into the workings of a free form psych band, and also casting a reverse mirror against the previous album, you get a sense of a band who are constantly shifting and exploring the limits of both their music, and themselves.

This only serves to provide the discerning fan with a body of work which can be quite daunting at first, but as you dive in you start to make connections. Flashes of past tracks show up in new ones as the band jam out their rhythms. The four tracks on Bezerkir II here are all taken from the Bezerkir sessions and represent the band at their most raw. No overdubs, recorded live straight from the floor, they turn the recording basement into a miasmic swirl of noise. Coming from a lineage which borne the Basement Blowoutsconcept, itself a fraction of the jams that exist in the TBWNIAS archive, its yet another interesting peak into the inner workings of the band.

There’s a sense of living on the edge here with the tracks representing some of the more directly raw nerve-endings than usual. The tumultuous riff of ‘From Dusseldorf To Cologne’ providing a full on exposition of the punk rock roots of the band. TBWNIAS symbol crank it up and fire off the heavy cannon, it almost feels as if the world is falling apart around you. It’s just as well that they temper this with the more sedentary, but much more trippy ‘With Respect To The Golden Rule’ to provide a nexus point where you can pivot between fiery rock and roll and peaked out bliss. In true fashion, the band don’t stay still for long though and that calm beginning is soon casting you straight out into the cosmos.

It must be something quite special to be part of a band which has the freedom to build a catalogue of music which defies any sense of normalcy, and with it an urgency to the music which can only come from playing live together, warts and all. It’s not easy listening by any stretch, and mistakes are plenty if you are that way inclined, but dig beneath the surface and there is an inner beauty to the noise that is produced. Once you discover this you may find yourself returning again and again to scratch at that particular itch and seek out those parts of the cosmos which seem to open in a Canadian basement every once in a while.