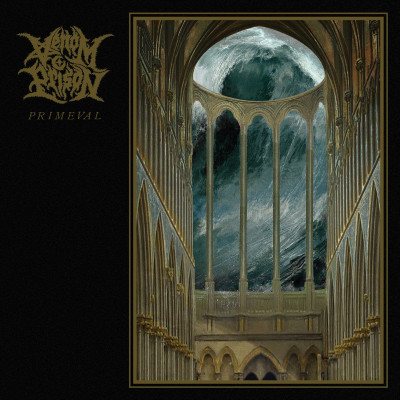 The profile of Venom Prison has ridden dramatically over the past few years and deservedly so with the release of their first two albums in 2016’s defiantly savage Animus and last year’s just as heavy Samsara, which have both been extremely well received by metal fans all over the globe for their fresh take on death metal. Add to this, a string of show stealing support slots and their own brutal headline live shows and you have a many reasons why the band are as revered as they are. With all the chaos that is going on in the world and in lieu of a new album at the moment, Venom Prison have decided to go back to the beginning before they prepare for the future.

Primeval sees Venom Prison revisit their earlier material in the shape of the bands two 2015 EPs Defy The Tyrant and The Primal Chaos in re-recorded form and shows how the band have developed but never losing any of that early primal heaviness.

While bands re-recording their early material can sometimes yield mixed results, Venom Prison get it spot on as the songs are given an even heavier lease of life with Larissa Stuplars vocals sounding even more focussed and venomous on these new versions and songs like ‘Defy The Tyrant’, ‘Daemon Vulgaris’ and ‘Narcotic’ sounding even more vital than they did when they were first recorded. These new versions sound huge and have a new energy about them for sure, and that’s making a bold statement, as they sounded as energetic as death metal gets when they were first released,

These revisited EPs both pay tribute and end the chapter of their early days and in terms of where Venom Prison go next, Primeval also features two brand new tracks in the nonstop savagery of ‘Defiant To The Will Of God’ and ‘Slayer Of Holofernes’ which combines At The Gates style melodic death metal with a thrash meets black metal vibe and the results are stunning which means both of those tracks bode well for where Venom Prison are heading with their next album.

This release shows exactly where Venom Prison started on their journey of brutality and also where it is going to take them next, and if one thing is certain, then it’s going to be that their next album is going to be something special, especially if it is in the style of the two new songs that end Primeval in ferocious style.