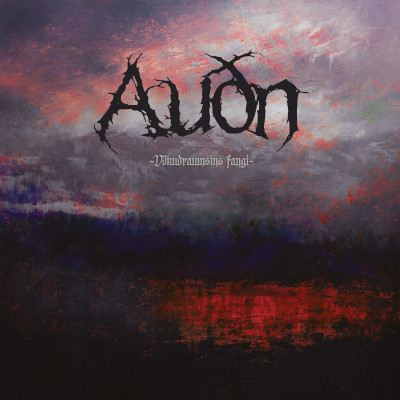 Iceland is a country known for its endless beauty, sprawling landscapes, glaciers and fields of lava. More recently though the dramatic and otherworldly land has spewed forth from its volcanic ash and flame a plethora of talent to ignite the black metal community. Bands like Zhrine and Misþyrming, for example, are all killing it, as are Hveragerði’s own Auðn returning with album number three, Vökudraumsins Fangi (prisoner of the daydream), which follows 2017s lauded sophomore effort Farvegir Fyrndar.

Auðn play mostly mid-paced dark metal tinged with radiant atmospherics that is more than reflective of the stark contrasting elements of their homeland. Vökudraumsins Fangi sees the band upping their production value as well as their already commendable songwriting. The gorgeous mastering has allowed for a touch more clarity giving the final mix an emotional depth and fiercer feel.

‘Einn um alla tíð’ begins the album with a gently sweet acoustic intro before breaking into a storming march of ‘true’ skin beating. There’s plenty of old school vibes imbued within the framework with enough bitter chill to make this one of Auðn’s best. That fiery final two minutes will cement that thought. The blackened death-stomp of ‘Eldborg’ continues Auðn’s demolishing reign, rife with high flying tremolo hooks, Enslaved chugs and ominous moments, it’s one of the albums shortest but most memorable tracks.

‘Næðir um’ boasts a stunning vocal performance from Sveinsson as well as some of the albums most frenetic blastbeats whereas ‘Horfin mér’ takes Auðn down a more doom-laden path. Penultimate track ‘Ljóstýra’ is impressive to say the least with its Borknagar-esque aura of slow dissonant guitar work building to sporadic blastbeat sections. Capping off the album is the title track, the only one of the ten to fully relinquish the blasting drums and make full use of spellbinding melody.

This is the kind of music I love to love. In my mind’s eye it evokes a wall of blackened and raging light beyond a veil of sensory soundscapes that cascade over your spirit in vivid colourful imagery. Auðn capture all the desolate beauty of the lonely wastelands that their translated name suggests in their unique brand of black metal as well as embracing all the juxtaposing elements of fire and ice their homeland has given them. The entire album is a dreamscape of epicness, soothing and ethereal at times and barbarous at others, making the music a joyous whirlwind to get lost in.

The blastbeats are deep and meaningful but not overbearing, the tremolos are icy and sharpened to a skin-tearing point and the vocals yield enough anguish to connect with. The riffs weave so beautifully through that it’s clear Auðn are very much a guitar-driven band with three guitarists Magnússon, Birgisson and Gylfason leading the ice-blasting storms like an Icelandic Iron Maiden. Riffs fly in aplenty, and the hooks, my god the hooks are sublime! Mogensen’s bass plucks are nice and clear thanks to the far improved mix and master and Pálsson’s restrained drums are precise and devastating even when at mid-range BPM.

The music is harsh and biting (in more than just the nippy sense) and has that rare ability to drag you into the mindset of the musicians, whisking you away through untrod landscapes Falkor-style. Sveinsson’s vocal range has a lot to contribute to this, from his guttural death metal style to more grim raspy screams, all suggesting a sense of pain and sorrow, which leads to a stronger connection to the listener. The addition of clean vocal sections for future releases would be most welcome given the style Auðn play.

Auðn play beautifully and always have, but Vökudraumsins Fangi shows the band honing that talent into what I feel is a flawless release with many stunning and emotive moments to store away. It’s grim metal to scream proudly from the tip of the highest peek as molten fire rains down as a backdrop to your own personal soundtrack. Remember this as the point where Auðn truly climbed to the top of that peek and placed their banner for all to see.