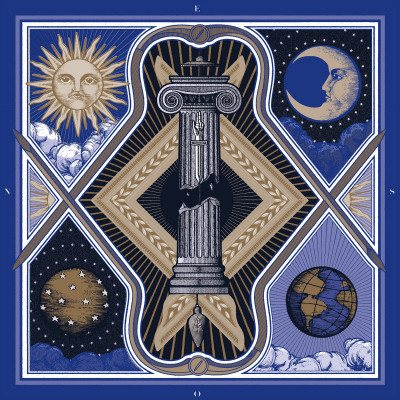 2020 has taken much from us, but musically it is the year that keeps giving. I myself have reviewed several contenders for album of the year and now with only two months left on this wretched calendar the audial gifts continue to come.

Since their inception in 2013 French sextet Déluge have been one to watch. Playing a heady mix of post-black metal and post-hardcore with an avant-garde touch Déluge have gained a considerable following and a heap of praise. With only one album to their name, 2015’s fantastic Æther, it’s time to unleash the long awaited difficult second album. Luckily for Déluge they have returned with Ægo Templo, an album that exceeds Æther‘s breadth of awe and showcases a more well-rounded band.

‘Soufre’ opens the album with splashes of watery ambience before launching into a wave of light-bearing guitars that pierce the soul. Brightness and beauty emanate from the song structure built upon prog/post influences. The track closes much like it begins, steeped in thoughtful expression with an air of positivity shining through darker clouds. The stunning ‘Abysses’ is a dark song imbued with a drowning sense of doom, replete with lamenting cries, lumbering drums and long drawn-out riffs that seem to reach out for hope. The intro of Maqam-esque middle eastern vocals conjurs a haunting atmosphere then backs an epic blastbeat which makes you want to splay out your arms and scream to the heavens… from there it’s a slow descent into despair.

The eerie ‘Fratres’ is a neat little instrumental that builds in tension with gravelly static noise. With every passing beat the shudder of fear closes in on you like the gaping maw of a black hole until you are suddenly consumed… and silence remains. There are a few of these curveballs which give the album a new dimension and add a touch of exotic flavour, all nuances that make Déluge stand out. ‘Baïne’ in particular is a highlight, featuring electronic vocal parts and a stunning performance by Maxime Febvet. It’s a great use of atmosphere with gorgeous guitar hooks and feels like Déluge shedding their more volatile skins in favour of melodious emotion.

Post-black metal tends to have a sombre feel, either lifting your spirits up from the dreariness or holding them down and pummelling them with the weight of cathartic purge or avalanches of pure emotion. This album leans more towards the latter with moments of pensive uplifting beauty gently brushed into the framework. Hope is a word that surrounds post-black and whilst Déluge are not as shiningly optimistic as bands like Violet Cold for example, Déluge offer a more lamenting approach along the same lines as Unreqvited.

‘Digue’ and ‘Béryl’ are two of the albums most heart-wrenching tracks full of these gut-punching melodies and wailing tremolo riffs, the latter being enough to strike you down with an aura of grief whilst not being so mournful it’s in your face. Ending the album is the emotional rollercoaster of ‘Vers’ with its bookend blastbeats and brilliant use of keyboards, it’s a mesmeric way to cap off the album.

Blastbeats are a staple of post-black metal and Déluge love to bash the skins aplenty, but that’s not to say they are overused, in fact those fits of aggression are used more sparingly. Soaring blastbeats and high tremolos are what carry you into that state of orgasmic fulfilment but it’s the spaces in between where emotion can blossom that are perhaps the most interesting. It’s these moments where Déluge can be their most creative, when they are destroying you with the tortures of the soul. Whether it’s doom-infused melancholy or caustic riffs and battering drums Déluge play that yin and yang commendably to great effect.

Déluge seem to show no compositional boundaries and suffer for their tremendous art. Ægo Templo is a vibrant and cohesive record with roots to various bands. Alcest and Deafheaven are clear influences and you can feel their echoes throughout the album. The musicians play wonderfully, utilising all the euphoric traits this blissful genre offers. From cold desolate noise and yearning instrumentation to the blackened harshness of blastbeating and beautifully juxtaposed stringwork. Vocalist Maxime Febvet’s screams pack in all the tortured catharsis you could wish for in a post-black frontman. He has the added ability of a euphonious voice and his dulcet cries can sound almost Chester Bennington-esque.

My love for post-black metal just gets bigger with bands like Déluge putting stunning releases like this out. Ægo Templo may not necessarily be a game-changer but it does everything a post-black metal album should do in the best of ways with Déluge’s unique twist. Ægo Templo, simply put, is breathtaking and there are no more words needed. No matter how you feel about the world or how deep you are in the mire, music will deliver you from pain, even if only for an hour or two.