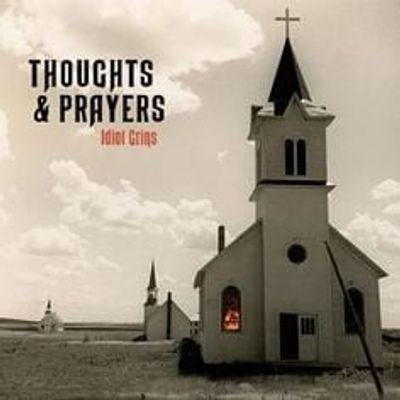 Those a bit familiar with old country gospel records and all things pre and post Americana could look at the cover and the title of the latest (fourth) album by Oakland quintet Idiot Grins and remember Thoughts & Prayers, the old gospel country album by The Louvin Brothers all the way back from 1959. And they would be perfectly right. Because this is exactly the same album. But, then, not really. On one hand, the Idiot Grins version of Thoughts & Prayers is an actual recreation of The Louvin Brothers’ original album, song for song. On the other, it is the bands’ interpretation and vision of the original by taking along all that went on in the realm of roots music in more than sixty years. It makes no difference which tracks you play, the opening ‘Satan Is Real,’ ‘The Drunkard’s Doom’ or the closing ‘I’m Ready To Go Home.’

What Idiot Grins have done is strip down the original to basic instrumentation, no big thrills, and frills, trying to strip it of any additional sonic ‘spirituality,’ just if they are in a church somewhere. Not in 1959 or 2020, but in either of those years or any in-between. The guys have attempted and succeeded in letting the original Louvin Brothers music speak for itself.

In the end, what we get is ‘real’ gospel roots music that in its sound and spirit is at the same time same as the original, but with a touch of timelessness that the original albums by The Band had. It is that timelessness that when you play it, you can’t even guess when this music was recorded – yesterday or back in 1959. The more you listen, the better it sounds.