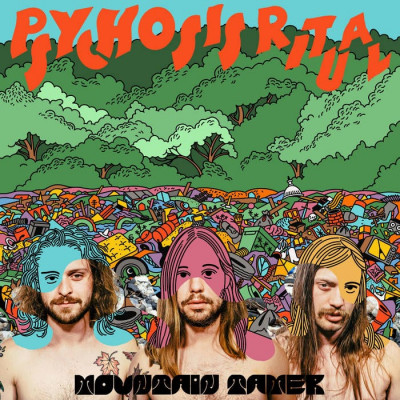 Woah. Sounds like someone has been at the cactus. Because Mountain Tamer have changed.

I picked this album up to review because their 2018 release on Magnetic Eye, Godfortune//Dark Matters – a sneering, snarling slab of Californian stoner psychedelia – was on my list of records to shout about.

But things got in the way. Apologies to the band, it was a great release, worthy of far more attention that it got. So by way of recompense, I snaffled this one. I mean how much could have changed in a little over two years? I mean the world in 2020 is pretty much the same as it was in 2018, right? Well. Turns out that a lot can change in 25 months. Who knew? Because Mountain Tamer have switched labels (to Italy’s Heavy Psych Sounds) expanded their minds, turned up the reverb and gotten way more nihilistic than they were on Godfortune.

And it is for the best. Because this album is a trip. Their previous effort was great, make no mistake, but in hindsight it sounds like the band were reluctant to release themselves from the shackles of safe, riff-driven psychedelia.

They certainly have here. The title track opens the album and begins familiarly enough, with a drum that knock-knock-knocks on your skull, then barges into your brain with a fuzzy, chug-a-chug-a riff. But that lasts all of about 20 seconds, before we are drenched in feedback and thrown down a velvet-walled rabbit hole. Guitarist/vocalist Andrew Hall tells us “look at my hands” before revealing “I’m not in controoooool” as his “eyes glaze over”, while the original riff is stretched out with the aid of thick reverb. Meanwhile, bassist Dave Teget weaves lines all around Hall’s guitar, while drummer Casey Garcia Mitch-Mitchells everyone into a trance.

It is at this point that I was reminded of the review I once read of Sleep’s Dopesmoker, which said that possibly the most frightening thing the writer could imagine doing was listening to stoner metal while actually stoned. Because whatever, err, psychosis ritual the band were experiencing when crafting this album, it certainly wasn’t all paisley and rainbows. And while their bad trip makes for a satisfying listen for us, kids, it is worth remembering Mountain Tamer’s underlying message the next time you go mushroom picking.

It gets even more unnerving, aided by the angry fuzz of the guitar on ‘Warlock’, which proclaims “I am not the cure to save you all”, followed by “Your mind is MINE” over a ritualistic riff.  And as if you are not spooked by the opening 10 minutes of the record, ‘Turoc Maximus Antonis’ sneaks up on you with an echoey guitar, eerie drums and what could be footsteps (I don’t know, I was behind the sofa by now). It then morphs into something that resembles the best song from their previous album, ‘People Problems’ along with the most acid-drenched 1970s hard rock.

Speaking of scary hard rock, ‘Scorched Earth’ displays the extent to which Hall can shout his way into our psyche, with some frankly frightening sounds coming out of his mouth – if you can imagine Perry Farrell after a weekend on the jazz cigarettes (and some cheapskate put tobacco in them) going through a few Leaf Hound covers, you may be close.

The next two songs, ‘Death in the Woods’ and ‘Chained’ are more orthodox stoner fare, albeit done with an LA punk snarl, but the final track, ‘Black Noise’ sends us away under no illusions that this trio has the capability to be far more menacing than a mere rock ‘n’ roll band. The lilting “ooooooooh” background vocals as the song builds only serves to add to the malevolent atmosphere.

And then after six minutes or so, as if we dreamed the whole thing, it is over. And we are left back in our safe place. And breathe (before playing it over again).