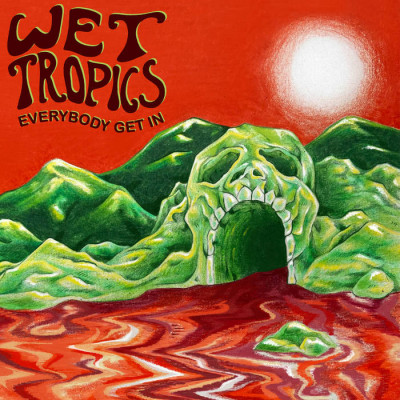 Everybody Get In by Wet Tropics

In many ways, sound combinations can lead you in quite a few directions. Chicago’s Wet Tropics basically do exactly that on their new album Everybody Get In. Actually, they bring in quite a few familiar (musical) faces – The Gang of Four, Psychedelic Furs, Pixies, or, if you need a few more ‘current’ references, Ty Segall and the likes of Osees.

So, do we get some kind of a sonic attack? We sure do! From the introductory ‘Cool California’ through the buzzing ‘Green Dreams’ to the self-explanatory ‘Heart Attack,’ they find no time and no reason to stop, and they probably shouldn’t.

By the sound of it, the band’s main man John Rejba (guitar, vocals songwriting) and the rhythm section of Krystal Rosenbrock (drums, vocals) and Justin Watts (bass) put on some punk-pop laced heat that only cools down a bit on ‘Tragic Accidents.’ The guys have their influences inside and outside their sleeves – you can hear all the influences there, particularly The Gang of Four (pace changes) and Pixies (the heat so evident on their early albums), but they obviously took them up as their own and give it a bit of a current swagger Ty Segall and other today artists give that sound.

While Rejba’s guitar and vocals have a prominent role on the album, it is actually quite an obvious group effort, as the rhythm section gives this music the edge it needs. In the end, Wet Tropics do create a sound that falls broadly in what was named garage-rock back in the sixties, but they also bring it into a dark long tunnel, that keeps on reverberating hours after the trio unplugged.