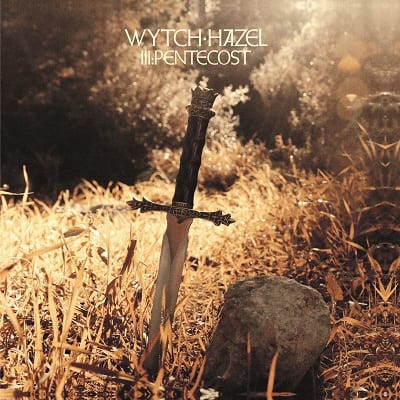 Formed in 2011 in Lancashire, Wytch Hazel carries the influences of the New Wave of British Heavy Metal and the aspects of Thin Lizzy. With two studio albums in the can, they’ve unleashed their third studio album on the Bad Omen label entitled, III: Pentecost. Their third release takes you back to that golden era of when metal was revising in the late ‘70s during the punk movement. But giving it this electrical jolt like you’ve never heard it before.

Wytch Hazel have done their homework very well. And with a little help from Purson’s Ed Turner and engineer/mixer James Atkinson, the album was recorded at the Stationhouse in Leeds. Listening to III: Pentecost, takes you back to those epic and heroic story textures that is like an opera from start to finish.

Both ‘He is the Fight’ and ‘Spirit and Fire’ go into the riffs of the Audio-Visions era from Kansas’ ‘Relentless’ that both Colin Hendra and Alex Haslam embark on. One is a rocking introduction, the other, is a power metallic sing-along into battle. So if you’re expecting something that is straight out of the snooze fest from the series finale of Game of Thrones, guess again!

This is like a continuation between the stories of Conan the Barbarian and the new 52 arc of Gail Simone’s run with Batgirl, it is a story that is brought to life. The guitars cry out into the night while Spencer’s drumming exercise pumps out those beats very loud for the rhythm and lead sections to draw their weapons. ‘I Am Redeemed’ features this galloping intro by Andy’s bass guitar with some medieval riffs as the explosives come down with a nonstop segment for the chance to fight back against Lucifer with some midsection organ work in the styles of Deep Purple. ‘Archangel’ makes the guitars sound very moody as if it creates these effects of rain drops as we experience an angel to guide our heroes for some bigger challenges.

With its dramatic atmospheres, the riffs that the duo guitarists channel, go into the depths of Pat Benatar’s ‘Heartbreaker’ as ‘Dry Bones’ has this eruptive roar as the bass takes the listener into the darkness of hell. Featuring these doomy sections and high vocal ranges by Hendra, he can hit those notes very well and giving it a hardcore slam by using Thor’s Hammer, Mjölnir. ‘Sonata’ is like an entr’acte before heading into the second act of the story. It begins with an organ delving into a mournful atmosphere as it channels the early Floyd sounds of the ‘Celestial Voices’ from A Saucerful of Secrets and bits of the ‘Atom Heart Mother’ suite.

‘I Will Not’ gives us a clue that the battle has only just begun as Hendra and Haslam has taken the listeners into the gruesome gore fest with these heavy textures as they fight to the death by honoring some of the masters including; Dave Murray, Adrian Smith, K.K. Downing, Glenn Tipton, Brian Robertson, and Scott Gorham. ‘The Crown’ is Wytch Hazel’s chance to clear away through the heavy thunderstorms and the bloody aftermath of the corruptive kingdom that is destroyed for good.

III: Pentecost is a very interesting album that has some fist-pumping compositions and story-structured elements that are finally brought to life. Now while I’m very new to the band’s music, I have to say that this album makes you want to dig out some of the classic NWOBHM albums you had hidden in your kitchen for a long, long time and dust them off, put on the record needle, and turn it up to 11.

And what is my take on Wytch Hazel’s new album? My response is this; turn this motherfucker on like there’s no tomorrow! And play it very fucking loud!