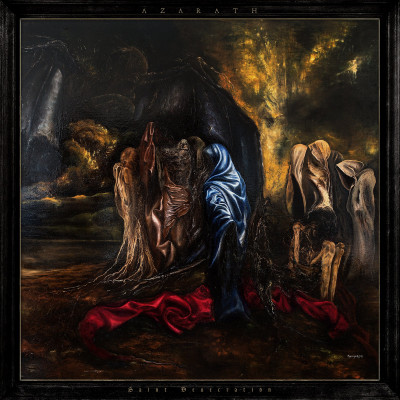 Polish blackened death metal horde Azarath have been spreading the Devil’s word since their inception in 1998. Founded by human drum machine and Behemoth powerhouse Inferno, Azarath have forged a crushing and influential brand of death metal over the years as well line-ups going through significant metamorphosis. Out is former vocal Daemon Necrosodom and in is new frontman Skullripper of Embrional fame.

Returning with new album Saint Desecration, their first since 2017s excellent blasterpiece In Extremis, Azarath have ten new tracks of extremity and devilry to offer up to the anti-gods. Warped and mesmeric guitar work opens ‘Death At Will’ before smacking you face first with militaristic drum beats and old school chugging. It’s just a taste of what’s to come and what does is teeth-gnashingly glorious.

‘Sancta Dei Meretrix’ ups the fury laid down by the first track with a maelstrom of volatile aggression, replete with urgent lightning riffing, razor sharp hooks and whammy bar theatrics. Skullripper’s rabid death rattles and vomited spat words tear through the chaos beautifully allowing a full flex of his vocal muscles and proving himself to be a fitting replacement to Necrosodom. It’s a damn storming track. ‘Profanation’ stands as the albums shortest track and whips by like a demon possessed, pulverising your willing ears with diabolical blastbeats and screaming guitar wizardry. Short but memorably sweet.

‘Life Is Death, Death Is Life’ is a ripper, blazing by at breakneck speed with Bart and Skullripper shredding commendably on guitars providing flailing solos and cutting riffs against Inferno’s bruising skin beating. Closing track ‘Beyond the Gates of Burning Ghats’ opens with garrotting vintage screeches and discordant string work. The atonal vibe continues throughout, tearing into a tremendous mid-point blast section and melting out into a crescendo of stunning solos that echo through your soul. What a perfect end!

The term old-school is thrown about a lot when describing Azarath’s music and that term is very apt. Azarath stick to a winning formula playing homage to their roots as well as the genre itself whilst injecting some little nuances into their mix. The atonal cry and angular guitar notes of avant-garde metal can be heard throughout the album and in tracks such as ‘No Salvation’, which is something Inferno’s premier band Behemoth have taken on over their past two albums especially. That angular Ulcerate-esque style of guitar work contrasts nicely against the crushing aspects of Azarath’s death metal.

Azarath play no-nonsense death metal with barely any build-up, tension or atmosphere, but more of a straight-forward ‘launch missiles and attack’ approach, and that works wonders. The darkness within the albums structure is enough to raise the creatures of hell and leave you as a pile of dust and meat, and that’s down to perfect song-writing and performances from the veteran four-piece.

Azarath deliver yet another punishing album saturated in spite and fury. Their riffs are as tight and killer as always, full of weighty meat hooks to pull you in and swirl your carcass about the vivid hellscape they paint. Saint Desecration goes down as one of Azarath’s most exciting and destructive albums to date. 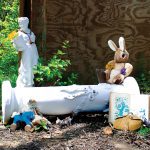