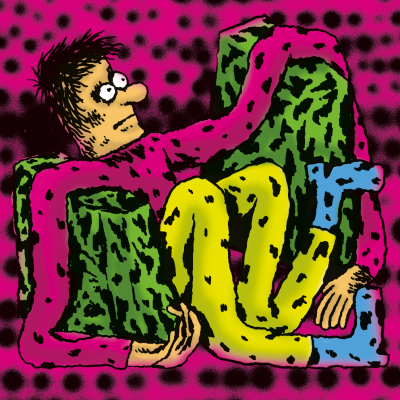 It could be a strange thing. Or it could be just that the wider audience is not aware. Yet. What’s at play?

Stereolab burst on the scene sometime in the Nineties, bringing along its vision of deconstructed pop that, relied quite a bit on one of the things Krautrock brought along ‘motorik,’ and quite often, the French lyrics of Laetitia Sadier. It just didn’t seem, or we didn’t know of anybody going the same, or somewhat similar route.

So, it is quite a relief to the ears that a band decides to take a similar route, and add a few bits of their own. The band in question is Rien Faire, a trio from Lyon, France with their self-titled album. And yes, they’re doing some good (unusual) things, akin to Stereolab.

But it is not just the fact that  Marie Daviet (keyboards, horn, voice), Lucas Hercberg (bass, big guitar, voice ), and Corentin Quemener (drum, carillon, voice) are singing in their native language, or following in the footsteps of Stereolab (yes, on both accounts). They are trying to add something that is different and in that respect, their own.

That means that they are throwing in bits and pieces that meander from the Stereolab way. Like the Pixies-style bass-heavy rampage of ‘La Racle Route’ or something Serge Gainsbourg would write for Jane Birkin with some twisted organ riffs like on ‘Etre Vieux.’ And these twists crop up along in all of the tracks here, like little surprises in small packages of deconstructed pop.

And as the title of the opener here, ‘Le ciel est mou,’ the sky is soft and ready to accept some excellent quirky stuff that Rien Faire has come up with here.