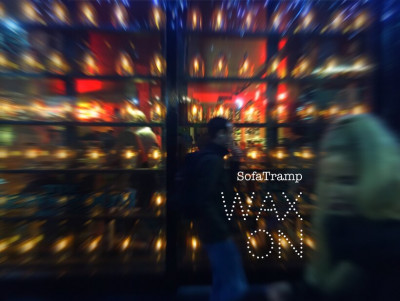 How many sub-genres are there in modern electronic music? You’re not sure? Well, probably the only ones that are have sat down quietly by themselves and have put down a detailed list. It might have taken them a day or two.

London electronic artist that goes by the name of SofaTramp just might be one of them. Why? Because his debut album Wax On sounds just like he has sat down for a few days, compiled a list of all the electronic music sub-genres and took on the task to play them all on this album. Maybe not ALL of them, but at least those that have a good solid beat in them, and if they don’t take you to the dance floor, they at least make you tap your feet along.

Sure, that is a humongous task, at which many have previously failed, but on the evidence of Wax On (maybe the follow-up will be “Wax Off”), he knows exactly what he’s doing, because it all sounds fair (and not square) and that his obviously extensive music library of all things electronic has served him well.

The main reason though why Wax On works is that at no point does SofaTramp try to force the beats or make them overpower all the other elements involved – it all sounds quite unforced and organic.

“Wax On is my 12-month journey through Post-disco, mid-tempo house, Detroit techno, dub, breakbeat, electro, rare groove and soul, downtempo, pirate garage radio, jazz-funk, glitch, and elevator… with some sludgy hip hop vibes thrown in for good measure. The slightly skewed kind of stuff that has ebbed into my subconscious over the years after falling asleep with it still ringing in my ears after a night out.”… So says SofaTramp himself, and what can be heard in the grooves (literally) of this album proves his point. Wax On is one relaxed electronic groove, that can play continuously all night long.