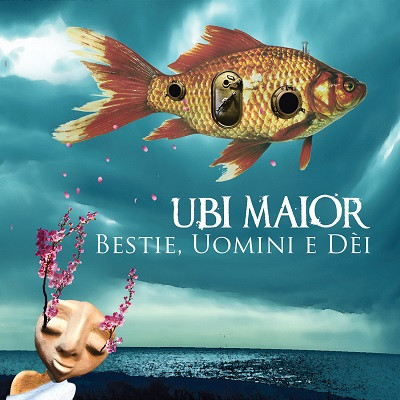 It’s been five years since Ubi Maior have put out an album after the release of their 2015 studio album, Incanti Bio Meccanici. Since their formation in 1999, Ubi Maior are considered one of the third millennium Italian progressive rock bands to come out of Milan. This year marks the 20th anniversary of the band’s formation. As the band have three studio albums in the can, they’ve unleashed their fourth release this year on AMS  Records label entitled Bestie, Uomini e Dèi (Beasts, Men & Gods).

It sees them pushing the envelope a bit further as they take symphonic keyboards, intensive guitar lines, rhythms turning hypnotic clocks, and killer singing arrangements. There are moments on this album that have really struck a chord with me in how they broke their chains by unleashing some killer organ and synths structures that are like a snake eating its prey with story-telling lyrics, and heavier structures that will keep you guessing until the end.

Opener, ‘Nero Notte’ begins with the guitars going towards Pink Floyd’s Atom Heart Mother-era with some catchy rhythm sections as the mellotron and violin sets up the tension for the bass to get ready for another attack with some rising organ and lead guitar parts. ‘Misteri di Tessaglia’ has this joyful folky approach on the keyboards that brings joy and happiness for the first two minutes before it becomes a tightrope space walk to the planets on our solar system, not knowing when the danger is about to happen.

‘Wendigo’ begins with these tribal drum effects that gives the instruments a chance to swirl down into the unknown with some middle-eastern textures. There is a psychedelic ambiance that transforms itself into a cat-and-mouse sequence as it segues into the Machine Head-era of Deep Purple with snarling riffs and Ian Gillian-sque screams that would have made Greta Van Fleet shit their pants on who the real Speed King is.

With ‘Nessie’ Ubi Maior travels their Organ grooves into a Neo-Noir atmosphere as the band travel through the genres between the Rock Progressivo Italiano sound and Jazz Fusion textures with some heavy trumpet and violin touches. But I can hear some of the French prog influences that the band brought in this composition with some dark territories that crosses between Atoll and Quebec’s own Maniege in there as the title-track sees them honoring Uriah Heep on the closing track.

This was like a breath of fresh air that was badly needed despite what is happening of the pandemic since March of this year. While we’re almost getting to the end of 2020, Ubi Maior’s new album is what we all need to get away from the storm of COVID-19 and maybe a glimpse of what the roaring ’20s will be in the years to come.