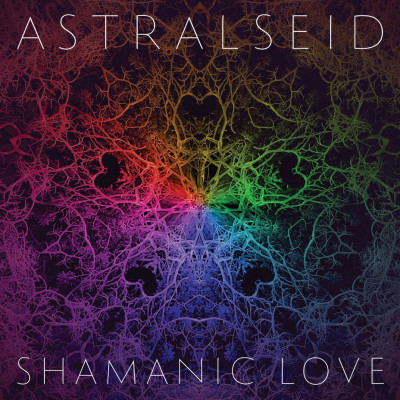 Sometimes album titles don’t tell you much. But with Shamanic Love, the second album by the Norwegian electronic duo Astralseid, the title is certainly perfect guidance of what you can expect musically. With the accent on shamanic.

Now, Shamanic rock, music, not the rocks themselves, which do have significance in Shamanism, is a genre that has been around for a while. Julian Cope is one of the better-known practitioners in one of his multitude of phases. But, what about Shamanic electronics?

In a way, the likes of Dead Can Dance have veered in that direction, Gustav Holberg and Rúnahild, aka Astralseid seem to have completely immersed themselves into such a sound on their current album. The duo takes the current meaning of the word trance and combines it with the meaning it has to the good old real Shamans through a set of four extended electronic excursions that combine The Orb-like ambients with tribal trance and psybient.

As you might expect, the predominant mood is quite dark and foreboding, but then, so are the current times. Luckily, Astralseid is able to mix the mood and pace throughout to both keep the listener fixated and make them pick on the rhythms they throw in throughout. The spirit of the Nordic music seeps in throughout. No wonder, since the duo started out making acoustic music with local folk tinges.

What is also quite interesting is the fact that Astralseid envisaged and executed Shamanic Love as a set of in the studio improvised pieces, giving them the organic feel and hitting that ritualistic vibe they went for right on the spot.