(((O))) Review: Countless Thousands – …and the Triumph of Justice 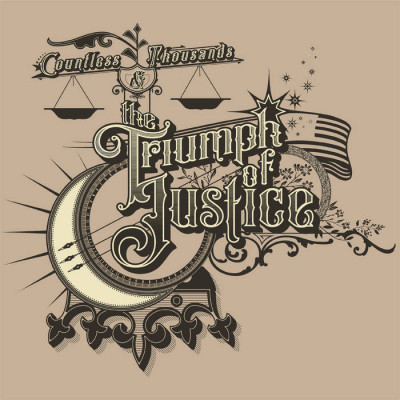 And the Triumph of Justice by Countless Thousands

If you are not familiar with Glendale California’s Countless Thousands, the cover of their latest album …and the Triumph of Justice could be a bit misleading. But then, it might not. Yes, it does look like a cover that would don a new Americana or post-Americana release. But then, when the dual guitars on the introductory title tune come in, you realize it just might be post-everything.

And, yes, you do get some Americana sounds here, like on ‘The Rat,’ or ‘Solidarity Forever.’ and elsewhere on the album, but then you also get some powerpop sounds like on ‘Game Change’ good ole’ punk of ‘Space Nazis Must Die!’ Very often, it is all three, and more in one song. With all these shifts in music, there is one constant in the theme – social and political comment that takes no prisoners. ‘Space Nazis…’ can tell you in which direction their criticism is directed.

But with all their shape-shifting it is quite a feat how the band handles all the changes with ease and aplomb. This fact becomes even more amazing when you consider that the album was recorded under quarantine entirely in two kitchens. Somehow, it all gels together and works to further underscore the message Countless Thousands wanted to convey. Maybe there was some good food in those kitchens. Or maybe this band knows what they are doing. Or maybe both.

Whatever the case is, it is a surprisingly good release and it might bring to the forefront the genre of Theaterpunk as Countless Thousands prefer to call their musical concoction.