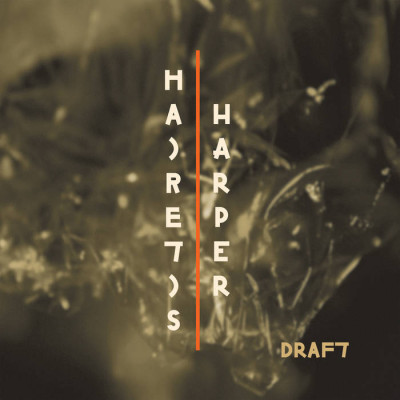 Categories and genres are made to be broken. Not everything created as music can really fit into one category or even a few of them. Still, when you are faced with such artistic work, you at least have to try. With Draft, an album by duo Hairetis Harper (Yiagos Hairetis – lute, brief vocals, and Maria-Christina Harper – electric harp), you definitely have to try. Without sacrificing the possibility to enjoy.

Sure, by the description of the instruments the duo play, you would expect some sort of an ambient, even new age thing. And you do get that, but that is only the tip of the iceberg. Even with the obviously titled ‘Intro,’  as the composition develops, the duo verge even into some sort of lead-bearing (as in Led Zeppelin) post-rock territory, while ‘Lost In The City’ that follows shows that the duo has their jazz/blues inclinations too.

Of course, as the album progresses, you get the sounds that you might have expected from a lute/harp combination – world (Greek) music and classical. But, what is evident throughout is that the duo lets their imagination and musical knowledge fly all over, wherever their fancy takes them as the compositions progress.

The lutist Yiagos Hairetis is on one hand obviously an expert of his instrument, one of the favorites on the island of Crete, where he originates from, but is obviously somebody who is a fan of the heavier side of rock music, who along with Zeppelin has quite a few of Doors and Black Sabbath records in his collection. On the other hand, Maria-Christina Harper has an ear not only for the harp as it is played in classical music, but is also quite familiar with Dorothy Ashby and her use of harp in jazz.

But the key lies in the fact that on Draft, Hairetis and Harper were able to combine disparate sounds and not so often used instruments to combine into music that is a true joy.