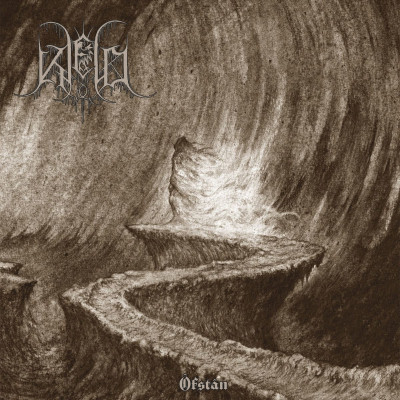 Now Friesland might not be the first place that comes to mind when conjuring up prime black metal locales. It’s no Oslo, or Stockholm, or even Newcastle, but it has a respectable legacy behind it, and Kjeld have been one of the most promising of its children for the past decade or so. Their debut Skym was a solid work of expressive fury whose only crime was sometimes giving the listener too much to take in at once; Ôfstân doesn’t learn anything from that, but rather doubles down, giving so much more in atmosphere, melody and unadorned misanthropy, and its excess is precisely what pushes it towards greatness.

As the first salvo of ‘Betsjoend’ is fired, the intensity of Kjeld is immediately made apparent. A rising wave of tremolo paves the way for tight and expressive drumwork, every snare blast struck with military precision, and though the riffs ebb and flow, those drums never really let up. A soaring mid-section break that brings to mind an early-Blut Aus Nord level of synthy majesty does ease off the pressure, yet the drums feel impatient, the pauses just itching for another furious fill.

There’s a real focus on the epic throughout Ôfstân, only ‘De Iensume Widner’ and ‘Asbran’ clocking in under the five-minute mark. The former, a punchy but resolutely groovy cut excels not only in letting those drums roll and flutter, displaying some exemplary technicality, but also switching pace to a mid-paced groove in its final minute that almost feels too catchy, too quick to bury into the senses and the subconscious. The rest of these nine offerings stretch, twist and swell in the most contorted of fashions, fusing old-school aggression and a more modern slant that stresses nuance and atmosphere without selling either of them short.

In the wrong hands, this could be a recipe for disaster. The melodies stand in stark contrast to the album’s more unrestrained passages, tempos are bounced to and fro like tennis balls, and there’s a willingness to have anything go, from squealing electronic interludes to the monumental folk-doom of ‘Falske Doop’, but something holds it all together. Whether that something is their focus on their homeland through subtle atmospherics and tortured vocals (all delivered in their native Frisian, naturally), or if it’s down to the contemplative fashion in these disparate elements are arranged, the shifts never feeling jarring or unnecessary, is a matter of perspective. What is undeniable is that this isn’t so much a step up from their debut as it is an evolution in form and skill, a complex and intuitive record that marks Kjeld as a band to watch out for in 2021.