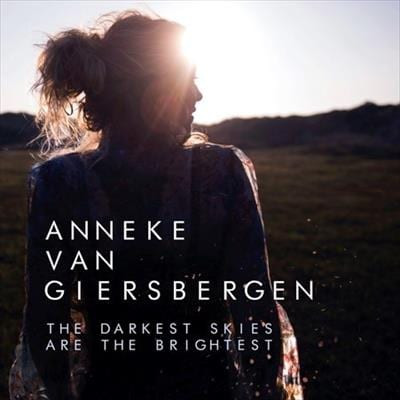 The Darkest Skies are the Brightest by Anneke van Giersbergen

Since 1994, Anneke van Giersbergen has been one of the most incredible singers to come out of the Netherlands. From being a frontwoman for The Gathering from 1994 to 2007, working with bands and artists such as; Devin Townsend, Wetton/Downes, Ayreon, Within Temptation, Anathema, The Gentle Storm, and Vuur, she’s been performing, writing, and creating music for 27 years.

Her latest album The Darkest Skies are the Brightest from the InsideOut label, showcases Anneke as a singer-songwriter. It proves that she’s more than just a metal queen and going beyond that route by telling her listeners, “I’m more than just a metal head, let me show what I’m going to do with this album here.” It tackles on the subject of challenges that we face which are very personal. And how we are forced to ask these questions which are bigger than we expected.

The album itself is haunting, beautiful, and emotional. It showcases Anneke’s struggle to not become pigeonholed as the Queen of Metal. In the PBS documentary, The World of Jim Henson from 1994, author Maurice Sendak, best known for Where the Wild Things Are and The Sign on Rosie’s Door, describes about when artists do get pigeonholed who want to do other things besides the Muppets from Jim’s point of view when The Dark Crystal didn’t do well when it was released in 1982. “Because all artists are pigeonholed. Everybody, whatever they do for a living, they’re pigeonholed. You’re a TV guy, a book illustrator, a painter, a musician, you’re a dance. And it should be a dancer whose a painter, aye mamma-mia! What are you going to do with this person? None of us know how to get there.”

For Anneke, this is her free at last album by presenting her acoustic and folkier side. ‘My Promise’ is her continuation on where she left off during The Gentle Storm’s ‘Endless Sea’. There is a battling through the stormy seas, burning fires, and the duel between heaven and earth with a Celtic mournful arrangement.

‘I Saw a Car’ is a stomping groove that is almost sung by a campfire every night as it swings through Janis Joplin’s ‘Mercedes Benz’ and Patty Zeitlin’s ‘Spin Spider Spin’ while the west-coast drive down the highway on ‘The Soul Knows’, remembers the most important moments to look forward as the future awaits for some explosive midsections from the percussions.

‘Lo and Behold’ is a raunchy yet bluesy-folk composition with some acoustic riffs that has a chugging, foot-stomping, and clapping rhythm section that features a rising gospel midsection that spreads inside the church. Meanwhile, ‘Losing You’ is Anneke returning to the Acid Folk scene from the realms of Turid Lundqvist, Mellow Candle’s Clodagh Simonds, and Trees’ Celia Humphris.

‘Survive’ is this intensive arrangement done by a traditional Russian folk dance as Anneke is finally asking the survivors of people who went through abuse and neglection, what they went through by standing up for themselves and fighting back. Anneke has finally done something special to come outside her shell and revealing the true power of who she really is. And The Darkest Skies are the Brightest, is a jewel that shines brighter every single day.