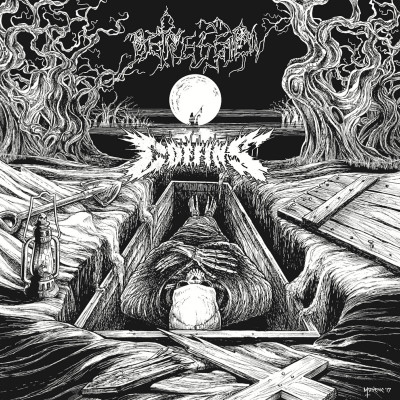 Split by Coffins and Depression

With both bands having released so many split releases in the past, it seems apt that Japan’s Coffins and Germany’s Depression join forces for this split release. Both bands share an impressively prolific output of nothing but quality underground extreme metal, with the results being never anything less than full on death metal assaults. This collision of raw and primal death metal sees both bands really letting loose in the most feral and unhinged ways possible. bWith three tracks by Coffins and six by Depression, there is plenty of guttural riffs and earthly growls in the offing and all nine tracks are nonstop feral blasts.

Coffins contributions are first up and consists of two new tracks in ‘Things Infestation’ and ‘Born From Fear’ as well as a cover of ‘Morbid Way To Die’ by Swedish death metal masters Grave, which is executed the Coffins way and ends things brilliantly. Forgoing most of the doom influences which are traditionally part of the Coffins sound, the band go full on death metal here and it sounds like they are having so much fun doing it, really letting their death metal influences run riot and it sounds impressively defiant.

After the deathly greatness Coffins, Depression blast straight into action and kick off their offerings with the macabre vibe of The Neutron Hammer’ which starts off with a creepy spoken word intro that is reminiscent of Slayer’s ‘Dead Skin Mask’ before descending into an even more hellish and evil direction and sounding all the better for it, this is nonstop bloodcurdling death metal with a solid helping of grind and Depression do it better than most. From then on in, it’s a whirlwind of deathly grooves and riffs with the berserk ‘One Last Smile’, the brief but brutal grind of ‘Mass Extinction Of The Parasite Race’ and the brutal groove of ‘The 2nd Messiah’ proving exactly why Depression are so highly regarded in the extreme metal underground.

Depression also offer a cover on this split, and they brilliantly choose to cover a Coffins song (‘Altars In Gore’) and pay tribute to their a Japanese brothers in style before ‘Zerfall’ finishes the split off on an unholy high.

Coffins and Depression have a mutual respect for each other and this split demonstrates that perfectly and fans of the purest and rawest forms of death metal will find plenty to love here and will salute both bands and their songs of sublime brutality.