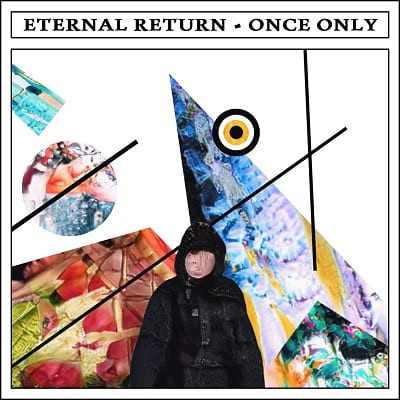 Once Only by Eternal Return

This international five-piece band launched back over a year ago in Berlin. The name of the quintet is called, Eternal Return. The line-up considers; Colin Edwin (Porcupine Tree, No-Man, O.R.k) on Bass, Paul Godwin on Piano and Vocals, Robert Jurjendal (Fripp’s Crafty alumnus) on Guitar, Miguel Noya on Keyboards, and Miguel Toro on Drums. Recorded and mixed at the Famous Gold Watch Studio in Berlin and at Pete Townshend’s Grand Cru Boat in St. Katherine’s docks in London by Bob Spencer and Jonathon Hocks, Once Only tackles on the subject of “nomadism”.

While the world had stopped last year in March due to rise of the COVID-19 pandemic, it was inspired by Noya’s status on the economy in Venezuela and diaspora politics. Eternal Return’s music has this dark ambient structure that goes in the tunnels between Brian Eno, Manuel Gottsching, Tim Bowness, and Popol Vuh. Their debut album didn’t just take me by surprise, but it goes beyond the Prog genre by taking a leap forwards into the unknown.

‘The Void’ is this mellowed-down jazzy composition featuring Milad Khawam’s trumpet work. Leading into an abandoned house that has been in ruins, it captures the spirit of Pink Floyd’s Wish You Were Here-era and King Crimson’s Lizard that takes place during the midsections of ‘Bolero’. Godwin who plays brilliantly on piano, his vocals resemble the mastermind, Tim Bowness. He walks us through the rubble knowing that the pain and suffering this person went through, freed from the abuse and damage they went through inside that old house, but the scars will be a part of them for the rest of their lives.

The opening track ‘Nomad’ showcases an Asian tribal percussion work. Similar to the main character in Alejandro Jordorowsky’s surreal midnight western 1970 classic El Topo, Godwin becomes this guru that is telling the listener on this spiritual yet difficult quest he’s embarked on. And what he saw in the futuristic wasteland, isn’t pretty. Both ‘A Medium-Sized Village’ and ‘The Triggering Town’ sees Noya and Jurjendal setting up the dystopian score as Toro and Edwin follow suit to capture these improvisations of a free-form Indian tribe. And then, Jurjendal and Godwin play this melodic loop dealing with the resurrection of cleansing your tortured soul as the rain effects trigger out the depression this characterization human being went through, who is on dry land in the middle of nowhere to take him to the next chapter of their lives.

‘The Bottom of the Pond’ comes together as one while the quintet bring the story into a big giant circle before capturing the essence of Ultravox’s ‘The Wild, The Beautiful, and the Damned’ and The Cure’s ‘Burn’ from the 1994 soundtrack, The Crow. ‘The Sky’ which closes the album is an oceanic beauty that carries the similarities to the rhythm of Eno’s ‘Another Green World’ as Jurjendal honors those Frippertronics before switching into a lukewarm acoustic ballad that sets a course to a brand new day. Once Only is quite an exaggerating debut from the quintet and from Colin Edwin as well.

They really stepped up to the challenge by going beyond the genres in making their first album a spiritual journey with a dark atmosphere until there is a sign of hope at the end. In the words of the ending speech from Hunter S. Thompson’s 1971 novel Fear & Loathing in Las Vegas, “The desperate assumption that somebody…or at least some force – is tending the light at the end of the tunnel.”