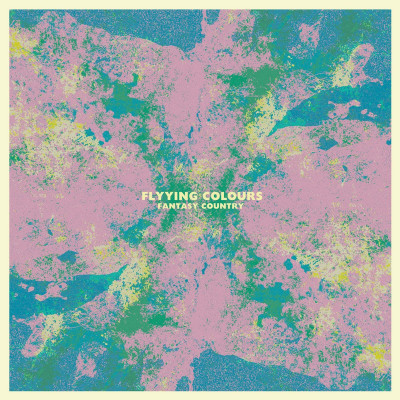 Flyying Colours is a perennial favorite of mine, and I was psyched to see this record come up for review. Having followed them since their formation circa 2011, they’ve tapped into the psych gaze genre in a big way. It is inherently part of their cheery sound, music for a long drive or a sunny day at the beach. Early in 2020, they dropped their ‘Goodtimes’ single, but they held off releasing Fantasy Country due in part to the pandemic. I mean, who could have foreseen the global mess we are in?

This four piece consisting of founding members Brodie J Brümmer and Gemma O’Connor along with Melanie Barbaro and Andy Lloyd-Russell, is hard-working and being unable to tour must have been difficult, to say the least. How they manage to pull off the fantastic push and pull of their gorgeous psych pop makes me believe in divine intervention. But who cares how it comes about, they pull off another stunning feat on this, their second full length. The lead off singles ‘Goodtimes’ and ‘Big Mess’ have been out in the world for a while, so there isn’t much I can add to the music critic accolades that hasn’t already been reported.

‘Goodtimes’ sports an interesting dichotomy between the upbeat melody and the somewhat doubtful lyrical outlook. The singer even repeats ‘gonna have gonna have a good time’ in the chorus, as if they need to convince themselves. But that is my own interpretation and may not be anywhere close to the truth. In any case, this song soars and will surely put a smile on your face. ‘Big Mess’ is even brighter, with a foot tapping main melody, and the song title at least describes the chaos we have all been through. The song predates the pandemic, but I have to say, it sure fits hand in glove with world events. I wish they were right, that it had never happened.

‘Ok’ is the recently released third single and is my pick for best song on the album. Once again, a gray outlook over arches the sprightly melody. It has become increasingly clear that this band has mined the best sounds of the 90s and threaded it with their own take on the intermingled genres of shoegaze and psych. Well done, I say! ‘Its Real’ is a subdued affair, though it is laden with a dreamy undercurrent and a nice exchange of male and female vocals.

‘White Knuckles’ is droning space rock, with a massive up-swell of volume that will surely leave your senses vibrating as it wallops your senses. It is the longest track at just a tad over five minutes, and as soon as you are caught up in its heavy vibe, it will fade to black. ‘Eyes Open’ is cosmic psych, another interstellar journey with almost gentle sonic swells, washing over you in wave after wave. There are words mumbled in the backdrop like a mantra, and it’s the most chill tune on this release. ‘This One’ is another barn burner with killer hooks, and can anyone say, “Fourth single for sure?” It nearly ranks with ‘Ok’ as a personal fave. Very cool!

‘Boarding Pass’ is the closer, and what a fine piece of work it is. A pretty tune with the same penchant for melody and harmony that this group possesses in spades! All in all, this is an excellent release from one of my favorite groups in this genre. Highly recommended for all fans of 90s shoegaze, dream pop, and psych pop.