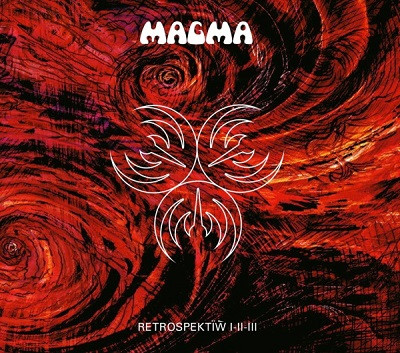 This 3-CD set consists of Magma’s three incredible live performances they did at the Olympia in Paris on June 9, 10, and 11, 1980. For Magma, this wasn’t just a homecoming for the band, but honoring the 10th anniversary of their celebration. Originally released on the RCA Victor label in France in 1981, the live album was released in the form of two albums. One double (Retrospektïẁ I-II), and the other as a single release (Retrospektïẁ III). Now Magma aren’t just a prog-rock band, but more like a family. Retrospektiw has been reissued a few times. One for being a part of the 12-CD live box set Köhnzert Zünd in 2015, the 3-LP set from the Southern Lord label in 2017, and now on Magma’s own label, Seventh Records.

You have the two opening suites of the first and third movement of ‘Theusz Hamtaahk (Time of Hatred)’ and the classic that refuses to die, ‘Mekanïk Destruktïẁ Kommandöh’. Both clocking in at 36 and 40 minutes and sung in the Kobaian language, you can feel the electricity on the live album and the audience’s stamp of approval as they kick into overdrive to bring the venue down and erupt as original vocalist Klaus Blasquiz and Christian’s arrangements becomes this intensive roller-coaster ride that is waiting to happen.

‘Retrovision’ has this challenging sequence between the bass and electric keyboards by Dominuqe Bertram and Jean Pierre Fouquey as Chevalier’s McLaughlin-like guitar work sees Magma travelling into the territory of the Mahavishnu Orchestra. Stella Vander, Liza Deluxe, and Maria Popiewicz are transformed into the soulful sisters of Aretha Franklin and the Staple Singers before Christian gives his bandmates the signal to return to ‘The Noonward Race’.

Chevalier’s guitar heads into a virtuosic swimming exercise before sending in a tidal wave to crash into the city. The alarm bells ring out of the blue thanks to Christian’s drumming before kicking into a reprise section from the Attahk album where it becomes this melodic fanfare of ‘The Last Seven Minutes’ as audiences cheer and applaud for all of the hard work that Magma has brought to the Olympia.

‘La Dwaotsin’ is something straight out of the sessions from the Mekanïk album that features Christian singing and playing the piano. There are elements of ‘Da Zeuhl Ẁortz Mëkanïk’ in there as if the unearthed stories from Nëbëhr Gudahtt are brought to life showing some revelations from the accomplishments he’s brought after completing the celestial march.

‘Hhaï’ is in the spirit of both John Coltrane and Otis Redding. Christian’s scatting vocalizations fills up the halls as he and the singers do this call-and-response section before the train starts chugging into overdrive. It becomes this dueling intense drive between Didier’s violin and Widemann’s synths as they take in through the tunnels to see who will win before Chevalier joins up into the race and Paganotti’s bass goes in for the attack.

The bonus track on the third disc is a pre-production demo of ‘Retrovision’ that was recorded in January, 1980. While there isn’t a studio version of the piece, it’s quite interesting to hear this demo on what the band were doing to prepare for the 10th anniversary show and at times the intense level grows even stronger than ever.

In an interview from the 2012 documentary Romantic Warriors II: A Progressive Music Saga about Rock In Opposition by Jose Zegarra Holder and Adele Schmidt, Christian describes on the process of making music: “Life is always on a tightrope. Wanting to move forward without failing. It’s really difficult to pursue a goal, to take sufficient risks and to be lucky enough to come out alive, so that you can keep trying.”

With Retrospektïw, it is a challenge to listen and hear the arrangements that Magma has created. Either you get it or you don’t, the live recordings as Christian mentioned in the Romantic Warriors doc, is like walking on a tightrope. And if you are new to the band’s music, this might be the starting point.