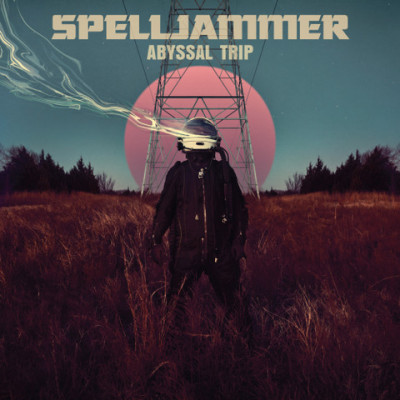 You know it is sure to be a good doom record when in the first two minutes there are a mere 22 bass notes, all thick, fuzzy and growling with menace. We’re not talking 22 different notes – nope. Literally a score and two times that the bass player has plucked the strings. Like your music low and slow? You’re in for a treat here. Because that is how Spelljammer’s new release begins, having given us an extremely long fade-in of feedback, in the aptly named ‘Bellwether’ an antiquated term meaning indicator of a trend or phenomenon.

The fade-in is also fitting, as it is has been almost six years since we last heard from the Swedish trio, on the excellent Ancient of Days. The rumbling bass is accompanied by an air-raid siren, as if to warn us to strengthen our house foundations and install some more robust speaker units in anticipation of another dose of heaviosity. And as ‘Bellwether’ forms into a lumbering malevolence, we are grateful for the warning. Because it soon becomes clear that in the ensuing years since Ancient of Days the band have delved even deeper into the realms of enormous thick riffs.

The opening track slides into ‘Lake’, which grabs you round the throat with its relative speed, as bassist-vocalist Niklas Olsson’s hoarse rasp serves notice of something on “the other side”. The song is unnerving (in a good way) as it lurches from noise-rock trappings to sloooow, satisfying doom – then as we go deeper into the abyss everything goes clean and trippy, before building up into an absolute monolith of a riff.

The next song, ‘Among the Holy’ owns an unkempt Al Cisneros beard, a Matt Pike pot-belly and a faded Dopesmoker T-shirt, its influences are so obvious. Not that it is a bad thing – I mean if you are going to put out a stoner-doom album which deals with “the concept of finding something undiscovered in the vast emptiness” (Olsson’s words) why not use Sleep, the founding fathers of fuzzed out riffs, as a touchstone?

In spite of (or maybe because of) their love of long songs, Spelljammer never let the slow boulders of fuzz outstay their welcome. This is especially evident in the title track, which is an ungainly 10 minutes long. In among the mountains of riffage, there is breathing space to be found in quiet sections which allow guitarist Robert Sörling to deliver some clean melody and lyrical solos. This band can pummel, yes – but they can also play.

Abyssal Trip was made in isolation in a house in the Swedish countryside. The trio (drummer Jonatan Rimsbo, who whacks his instrument with gratifying menace, completes the line-up) holed up there and started playing. You’d like to hope that they warned the neighbours first, or at least handed out earplugs to the local wildlife. Because you can imagine that when they got into the groove of a monster like ‘Silent Rift’, which closes the album in impressive fashion with a fret-melting solo from Sörling, there would be little attention paid to where the volume knob was turned to.

Yes, there is an element of “they sound a bit like…” about Spelljammer, but the band have taken the best bits of the genre – dystopian themes, vast, slow riffs, fuzz, fuzz and more fuzz – and created something which is more than worthy of our time. Put it this way: for an album which begins with a mere 22 bass notes in the opening two minutes, it flies by. And as the feedback fades on the final track, you’re more than ready to flip the record over and start the trip into the abyss all over again.