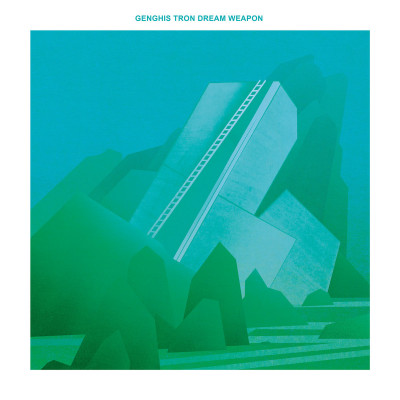 After a hiatus of thirteen long years, Genghis Tron make a welcome return with an album in Dream Weapon, an album that sounds like nothing the band have ever made before. The band have returned with a more grown sound and the vibe and music they have created with this album makes them sound like an even more confident band with an even bigger vision, a vision that is duly executed on this album.

Gone are the blastbeats and grindcore elements that helped shaped the bands early music and the electronic elements that featured alongside those now takes centre stage in an expanded and even bigger form and this has opened up the possibilities (and now realties) of the music of Genghis Tron. That’s not to say that the bands music is completely unrecognizable from what it was, as there are still elements of what made Genghis Tron unique in there, its just that their sound and whole vibe has grown and morphed tremendously, resulting in an even bigger sound.

It is not just the sound of Genghis Tron that has changed on Dream Weapon though as this album marks the whole new chapter with a brand new lineup that sees Tony Wolski replacing original singer Mookie Singerman and giving a completely new vibe to the vocals which works extremely well alongside the original members of guitarist Hamilton Jordan and Michael Sochynsky on keyboards / programming with this new era being completed with the addition of the band’s first real drummer and not a drum machine in Nick Yacyshyn (who also plays in Baptists and Sumac). And that marks a real shift in the dynamics of the rhythms in Genghis Trons music, with Yacyshyn’s powerful drumming driving the music on the album.

The opening track ‘Exit Perfect Mind’ starts things off in a truly cinematic fashion (and this album does feel like a soundtrack to an unmade movie) before the pounding electronics of ‘Pyrocene’ and the more traditional sounding but still progressive vibe of the title track takes in a whole host of different audio sounds. From then on in, the highs are plentiful from the blissed out feel of ‘Desert Stairs’ to the upbeat ‘Alone In The Heart Of The Night’ to the epic psychedelica of ‘Ritual Circle’ and finally the menacing finale of ‘Great Mother’, the range of vision contained on this album is breathtaking.

Dream Weapon is an aptly titled album as the dreamlike and hypnotic nature of the music on the album does indeed feel like it is soundtracking visions of dreams throughout its duration. It also marks a bold new direction in the evolution of Genghis Tron and it will be both interesting and exciting to see how they will develop further with this direction of which Dream Weapon is not only the start and a huge part of but also an immense and hugely enjoyable musical journey.