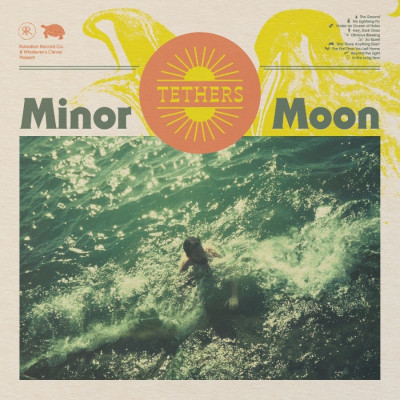 Is there something out there that can bear the name of Chicago folk-tinged rock? Who knows, many artists tied with the city have been given credit for such a sound, many of them connected with Drag City label and the likes of Sea and Cake or Will Oldham in all of his guises. So, if there is such a grouping, add to that list another of Chicago’s artists, Sam Cantor and his Minor Moon project, as can be heard on Tethers, his latest release.

While previously mentioned, Sea and Cake takes a more jazzy/electronic approach to folkiness, and Oldham explores all things American Gothic, Cantor goes more in the line of Neil Young’s approach to things by combining both of Young’s guises – the acoustic and electric one. And on Tethers it is usually in each of the songs at the same time.

Oh, he also takes a similar inward-looking approach to lyrics. As he explains it, “Minor Moon songs have always had this arc of discovery and I’ve always used them as a way to dive into really personal, philosophical, or emotional problems. It’s about finding some truth looking inward.”

“Among the rattling past / There’s a layer that packs / All the heat won’t let it go / A riddle crying to be told.” So goes the owner ‘No Lightning Fix,’ confirming at the same tie Cantor’s acoustic/electric approach at the same time, without really giving preference to either. This approach is confirmed throughout, with some quite impressive tracks like ‘Under an Ocean of Holes,’ which brings on some intricate musical shifts evident throughout the album.

Minor Moon’s Tethers boasts one of the best qualities in albums, the more it plays, the more some musical layers hidden in the grooves come to light.