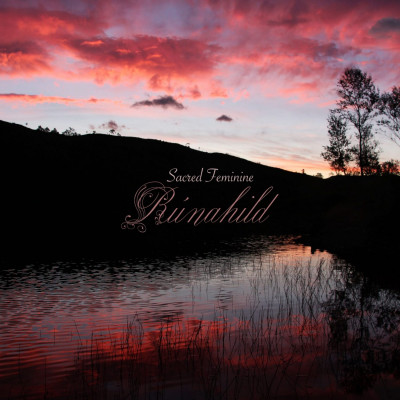 There’s been something of a Nordic revival in the past decade or so that seems to be coming to a head, or at the very least some kind of cultural Ragnarok. Vikings finished up its 7-year run, Wardruna found themselves topping charts around the world, and even the Guardian recently chose to turn their eyes towards the likes of Einar Selvik and Heilung. Outside of the sphere of the media, there has also been a greater appreciation of Norse spirituality, folklore and history that looks beyond the longboats and shield maidens into something more sacred.

As a follower of the seasons, of seiðr and of indigenous vocal traditions, Rúnahild embraced her profound way of life long ago and has dedicated the last 5 years to documenting this in song, melding voice, native instruments and smatterings of electronica to bridge old and new. Her latest release, the 3-track Sacred Feminine EP, stems from the concept of healing old wounds, of treating them with care and love in order to heal oneself, and that gentle warmth shines through her minimalist composition. ‘Måneskygge (Preludium)” opens with a lilting melody that pierces the empty gloom, slowly and with deliberate insistence, while a harp rises and falls alongside, a subtle but evocative medley that allows the listener to test the waters before completely immersing themselves.

The first sound on ‘Draum’ is that of a steady trickle of water, its echoes merging into a faintly sinister melody that’s equal parts Mike Oldfield and John Carpenter, the first real emergence of more ‘modern’ elements that sets Rúnahild apart from her contemporaries. Old and new meld with uncanny ease, creating an ethereal backdrop for her greatest gift, her voice. It’s difficult to pin down her approach as, quite frankly, there isn’t one. She borrows from spoken word, shamanic song and, on closer ‘Sacral Energy’, Sami joik and variations on throat singing, often combining and criss-crossing them to the extent that they are barely recognisable as discrete styles and instead act as an extension of her own spirit.

In the same way, her compositions don’t sit well with easy categorisation, sometimes floating coolly aloft ambient passages with the sounds of woodblocks and animal-skin drums low and steady in the background, and minutes later picking up the pace and launching into an ecstatic folktronica beat that probably would have been a floorfiller in Ministry Of Sound’s better days. Such an ebb and flow of energy runs throughout Rúnahild’s work but on Sacred Feminine, it feels more pronounced, moving to and fro between emotional poles while heading to a destination that is simultaneously personal and universal. It’s a testament to the wonder of the EP as a musical format too, a brief glimpse into a unique and profoundly engaging world that you will certainly want to spend more time inhabiting once it finishes.