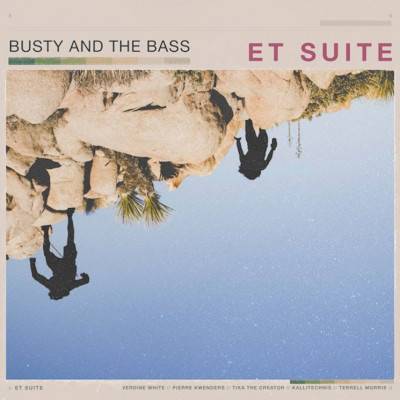 ET Suite by Busty and the Bass

There’s an almost legendary story (who knows whether it is true) about Miles Davis’ masterpiece ‘Bitches Brew.’ As the story goes, when the recording sessions were over, Teo Macero, the album’s producer and a legend himself asked Miles, “which tracks do you want on the album?” Miles responded: “let’s make it a double album with these tracks…” naming the ones he wanted to be included. Macero responded: “why these, all the rest of the stuff is brilliant too?” Miles responded: “Because I can…”

So you may wonder what does this (possible) anecdote has to do with Montreal’s jazz/funk collective Busty and the Bass and their latest EP, titled ET Suite? Well, you can start with the jazz/funk connection, where the octet’s music has more to do with straightforward funk with jazz touches all over the place.

Secondly, what do you do when your recording sessions burst with ideas and you don’t have a chance to fit in everything you want? It seems this has happened to the band when they recorded their previous album ‘Eddie.’ ‘ET’ was an album track, and the original version, that includes references to the likes of George Clinton and all his Parliament Funkadelic.

But then, there are so many ways you can interpret such a funky track. You can go the Sly Stone way (Part II), or the more jazzy way like Joe Bowie’s Defunkt, combined with Earth Wind & Fire, or at least two other ways presented here.

Luckily, it seems that Busty and the Bass are on an imaginative streak, and all the ET versions presented on this EP deserve full attention.