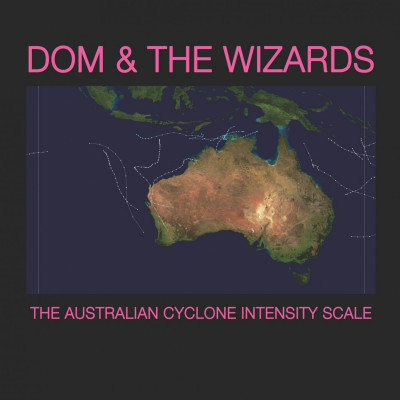 The Australian Cyclone Intensity Scale by Dom & The Wizards

It can be said now. The new Ian Dury comes from Down Under. His name is Dom Trimboli, he leads Adelaide band Dom & The Wizards, and he has quite a bit to say about people around him on ‘The Australian Cyclone Intensity Scale,’ his latest. It is not just Trimboli’s vocal inflection that reminds of the late great Dury, but his lyrical concepts that look at ‘unsung heroes’ around him in that exaggerated swagger Dury was so good at.

Musical similarities with the seventies pub rock are there too (say, ‘Heavenly Sweet Little Skin Wrapped Skeleton’), but Trimboli also has that left-of-center pop sensibility characteristic of his also great compatriots Go-Betweens and The Triffids (‘Woman with Wings’). And his lyrics have that literary/encyclopedic vibe combined with Dury’s street smarts.

Just take in what Trimboli himself has to say about ‘Outlaws and the Cops’ track: “The song is about nothing that can realistically be summarised. It’s more or less a poem consisting of a series of colorful and sinister anecdotes which are primarily concerned with the immense powers possessed by the magnificent protagonist: a woman who entirely comprehends the meaning of life (a quest the narrator can never seem to conquer). Psych-infused mythology with an Australiana twist.”

As with everything else on The Australian Cyclone Intensity Scale, it is musically all over the place. Here it is mainly a drum machine and a drone-like violin behind Trimboli-s speech-like delivery. It is followed by ‘Magic Man’ which sounds like another of Trimboli’s wild stories backed by a children’s choir, organ, and a subdued electric guitar.

Throughout, the album, you get the feeling that things might fall apart at any moment, but they never do, keeping the listener tight inside its intricate web of lies. Or truths, who knows.